The Twentieth Century Society has welcomed the government’s decision to protect a raft of Coventry’s post-war buildings.

The buildings listed at grade II include the Upper Precinct Link Blocks, the former Leofric Hotel and the BHS, Woolworths and Marks and Spencer’s on the corner of Market Way. 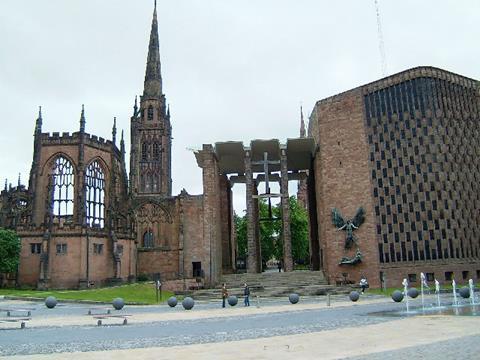 The DCMS announced it was adding the buildings to the list on the recommendation of Historic England on Friday.

It means Chapman Taylor will now have to apply for listed building consent for some of the work at the shopping centre that it recently won planning approval for.

The C20 Society issued a warning last month that its unique post-war architecture was under serious threat of being destroyed before it can take up its mantle as City of Culture in 2021. Senior conservation advisor Tess Pinto urged the government to act quickly.

She described the news as a “big, positive step” towards protecting the best buildings.

“These listing decisions have come just in time,” she said. “Approved plans to infill the colonnades, make major changes to the glazing, and remove canopies will now need listed building consent.

“This gives us the opportunity to make a stronger case for proposals that will rejuvenate the area and bring it up to modern requirements, but which will not come at the expense of what makes the area so special.”

Duncan Wilson, chief executive of Historic England, said: “The reinvention of Coventry after the Second World War and the vital role that its post-war architecture played in restoring pride and confidence was renowned internationally. These listings recognise a vitally important period in our national life, and places that have now come of age and will continue to play an important part in the evolving life of this great city.

“The buildings, built between 1948 and 1958, form the centrepiece of Coventry’s post-war reconstruction and reflect the spirit of a re-born city. They deserve the recognition and protection that listing brings. The generation that fought the Second World War lost a great many of their buildings and special places. They had to rebuild and reshape their England, and they did a remarkable job.”

The former Hotel Leofric in Broadgate is a thoughtful, considered design. The great majority of the external appearance and detail of the building survives in its original form and it was a key component of Donald Gibson’s plan for the post-war regeneration of Coventry after the bombardment of the Second World War.

The former Woolworths store and a parade of shops were designed by Harold Winbourne, the retail chain’s staff architect, and built in 1952-1954. The building sits in the Lower Precinct and Woolworths was one of the first of the shops to open its doors to the public. Woolworths were in favour of the new precinct and prepared their own scheme for the shopping centre with below-ground servicing. Woolworths closed in 2009 and the large premises divided. They were converted to use by the retail chains, Boots and Poundland.

The former Locarno Dancehall was once the principal rock venue in Coventry, where some of the most significant bands of the 1960s and 1970s played. Part of the outside is decorated with colourful abstract mosaic art murals by Fred Millett. They were designed to be eye-catching at all times of the day. In daylight the glass mosaic (which is washed clean by the rain) glitters in the sun and at night, small rectangular windows light up to create a pattern of diagonals across the wall. Although the building has been converted into a library, the dance floor hall with its surrounding balcony was imaginatively turned into the library’s reading room, so the historic space can still be experienced.

The British Home Stores building is unusual in that the corner was sub-let to Dolcis, with that section designed by a different architect. This building has an air of sophistication, with elegant detailing and use of good quality materials. But the Dolcis section is particularly interesting, with its grand picture window facing Market Way. And its canopies, which are continuous throughout most of the precinct development, have in-built sun awnings - they are a rare and intriguing survival. These two shops have been combined and form a key part of the post-war revival of this area, which played an important role in restoring pride and confidence in Coventry after the Second World War.

The levelling stone was laid on 8th June 1946 in the Upper Precinct as a symbol of the city’s rebirth and regeneration following the destruction of the Second World War. The stone was an aid for the construction of the new city centre. Though the stone was raised in height in 1956, it still sits in its original location within the Upper Precinct in which the city’s architects took measurements in order to construct the new buildings. The stone features a central carved panel with stylised carvings of a phoenix rising out of the flames, designed by the sculptor Trevor Tennant.

The Broadgate Standard, also known as the Elephant Mast, has been listed at Grade II because of its historic interest as a symbol of the spirit of Coventry following the bombardment of the Second World War. This elegant mast is an important focal point of the Upper Precinct shopping centre and was built following donations from several of the city’s industrial companies, demonstrating Coventry’s industrial power in the mid-20th century.

The Marks and Spencer (M&S) building, designed by the architects, Norman Jones Sons & Rigby of Southport, is one of four key corner blocks within the Precinct development. It has a striking and grand exterior which includes a large window, with two rows of windows set back in a deep stone surround, with elegantly coffered soffits and slender mullions in Westmorland slate, and panels of Travertine. The canopy below has circular glass lights allowing daylight to pass through. The shop front itself has been partially replaced but some original bronze door surrounds are still there today. Internally, the building retains much of its character and layout, with plaster cornices, stairs with slender handrails and elements of timber panelling.

The North and South Link Blocks of the Upper Precinct, constructed in 1954-1956, blend well with the look that was first established in the design and construction of Broadgate House in 1953, which was intended to create a template for the rest of the shopping precinct. The architects responded to the fact that this development was for pedestrians, uncluttered by cars and other traffic. The piazza, walkways, bridges and stairs allowed for a multitude of different views and angles for shoppers. The buildings are subtly designed to act as a backdrop to the hustle and bustle of people walking around; slightly festive with their tiers of balconies.