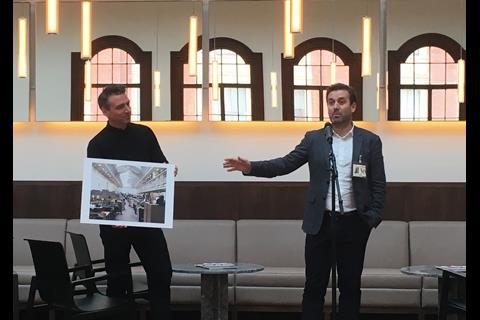 Kevin Carmody, left, and Andy Groarke in the new V&A members' room - with an image of what the room looked like before 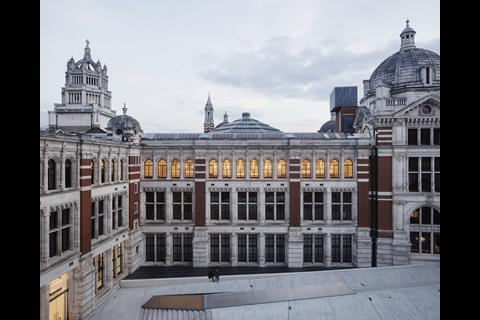 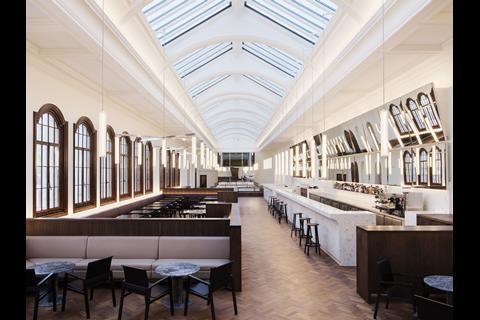 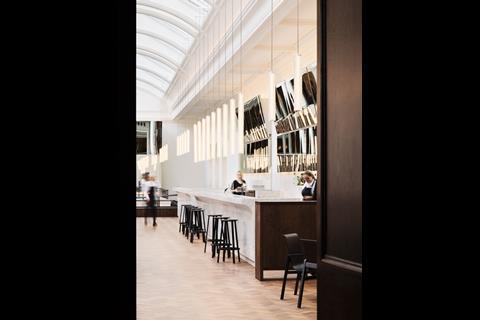 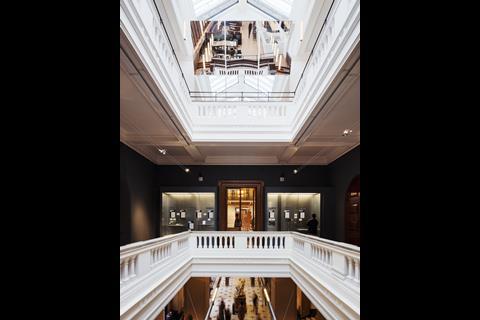 Three-storey void in the V&A with the Carmody Groarke members' room above and the museum's ground-floor mosaic below. A mirror in the members' room acts like a periscope, allowing members to see into the museum, and visitors to see them 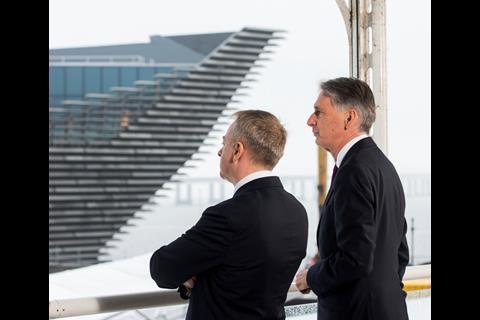 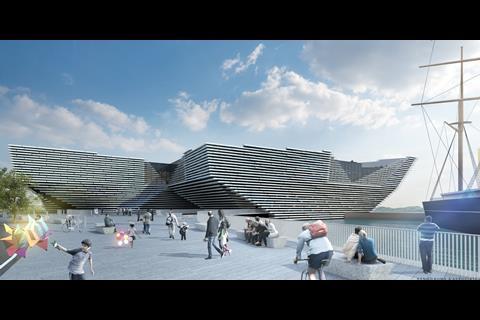 Carmody Groarke’s new members’ room has opened at the V&A.

The architects have turned a dusty archive into a light-filled space which uses tilted mirrors to give views out over the new Amanda Levete courtyard and down through the interior of the museum. One mirror also allows visitors to see into the room, turning members into “part of the museum experience”, said Andy Groarke.

They were inspired by Manet’s 1882 painting A Bar at the Folies-Bergère which features a mirror reflecting the crowd, he said.

The 48m-long members’ room is in Aston Webb’s 1909 extension to the V&A and was most recently used as an office for the National Art Library.

Carmody Groarke raised the floor level by half a metre, hiding the room’s servicing under a reclaimed parquet floor which was rescued from storage at Blythe House.

That also had the effect of allowing visitors to see out of the previously high-level, blanked-out windows, down at the activity in the Boiler House courtyard, now the museum’s main entrance.

Blinds have been removed from the skylights, giving views up to part of the V&A roofline – including the only built element of Daniel Libeskind’s scrapped Spiral: the top of a lift shaft.

Groarke said the sketch which “clinched it” for them – according to David Bickle, the V&A’s director of design, exhibitions and FuturePlan – illustrated a non-prescriptive approach to the space which put people “at the heart of the experience”.

Kevin Carmody thought they were the only finalist not to propose sub-dividing the “majestic” room. Instead they have used furniture and low screens to create distinct lounge and restaurant areas.

A bespoke Italian-made terrazzo bar runs along one side of the space, curved to reflect some of the room’s original features. Most of the fittings including the lights have been designed or commissioned by Carmody Groarke.

The practice has worked for the V&A once before: it designed the 2011 Post-modernism exhibition – and is also behind the Basquiat show currently on at the Barbican.

Carmody said they did not work with AL_A, whose project was already under construction when they won the competition.

The project is the first V&A building outside London and the first UK building by Kengo Kuma.