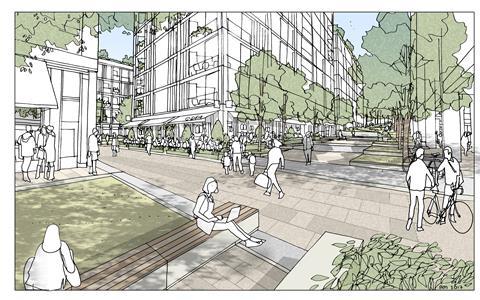 Buckley Gray Yeoman has been appointed by developer First Base as masterplanner and architect for a new 300,000sq ft mixed-use scheme on the site of the former Amex House in Brighton.

Early designs for Edward Street Quarter show that the site will accommodate approximately 150-200 homes alongside around 150,000-200,000sq ft of commercial space.

The centre of the site will feature a new landscaped square, while Buckley Gray Yeoman will look to reinstate Mighell Street, which once cut across the site, providing a pedestrian route that will run through the centre of the development.

The project is expected to be submitted for planning in early 2018.

Daniel May, head of design at First Base, said: “We see this as an opportunity to deliver meaningful long-term benefits for the local area and the city, including jobs, workspace and homes and new public spaces.”