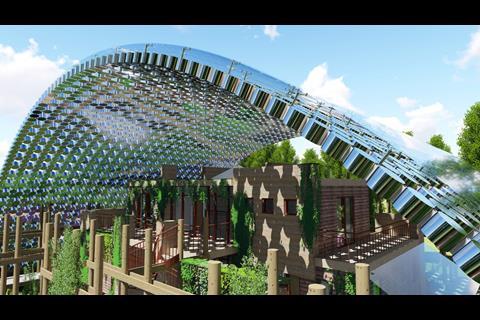 The steel-and-glass canopy roof proposed for the Occold House, by Alan Dale Architects 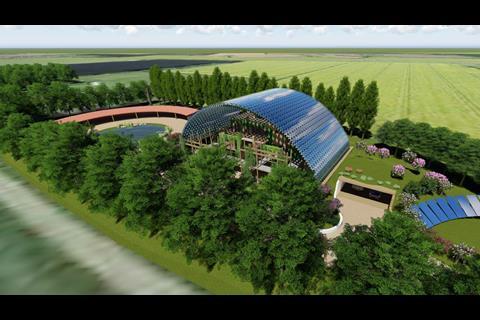 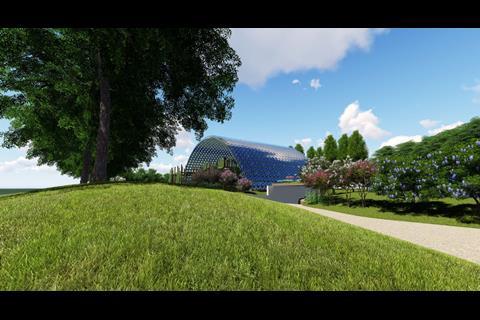 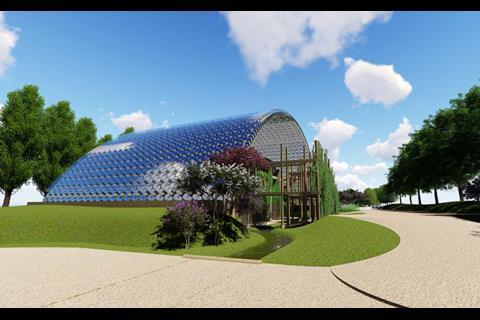 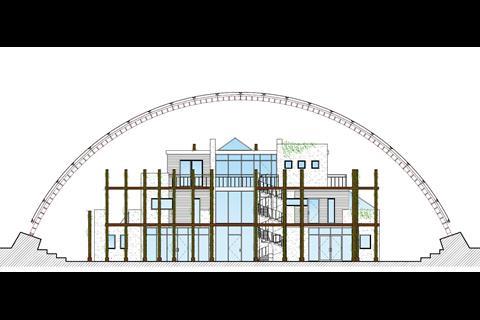 The plans, drawn up for a rural site in north Suffolk, centre around the creation of an 11.8m-high vaulted glass superstructure supported by salvaged stainless-steel washing machine drums.

Under them, a five-bedroom rammed-earth-and-timber house would be built to a design that includes skylights in most rooms.

Dale said the just-submitted scheme would make use of the local area’s clay-heavy soil, and that in addition to the building’s sunken footprint, a pond would be excavated to provide more earth for the structure.

He said the pond would accommodate underwater loops to feed a water source heat pump connected to a moat beneath the vaulted structure.

Dale, whose practice is based in Derbyshire, said the structure would appear as a “glittering bracelet” just above the tree tops of its setting, adding that its design had been inspired by a client who operates in the recycling industry and had been keen to reuse washing-machine parts.

He said clay, brick and flint buildings were a mainstay of East Anglian construction, while the area also had a more recent history of vaulted aircraft hangars and farm buildings.

“Although the overall design has evolved from functionality and sustainability, there is a certain symbolism, in that the modern technology of the vault is protecting the traditional structural methodologies beneath, enabling the best use to be made of its strongest qualities, while protecting it from its vulnerability to the elements,” he said.

Dale said the finished building would use the micro-climate created by the canopy to host exotic plants that would not ordinarily survive in the east of England as well as indigenous creepers, and that it was intended for the completed property to be used for botanical studies.