Two-storey building will include visitor centre and cafes

Acme’s plans for a 10,000sq ft pavilion at Stratford’s International Quarter has been approved by planners at the London Legacy Development Corporation.

The multi-storey pavilion, for Lendlease, is intended to create a new gateway to the Queen Elizabeth Olympic Park.

The building, which is to be constructed using cross-laminated and glue-laminated timber, will house the park’s visitor centre, a café and two restaurants and there will also be an accessible roof terrace.

The International Quarter London (IQL) will house around 6,300 workers by the end of 2018. Cancer Research UK and the British Council are due to move their headquarters there in 2019 and early 2020 respectively.

Designed by Rogers Stirk Harbour & Partners, the IQL is expected to be completed in 2025.

Lendlease is developing the £2.4bn complex in joint venture with London and Continental Railways. 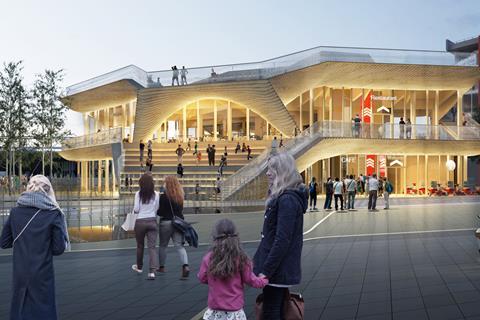 The pavilion has been designed by Acme