Sheffield firm OS31 has drawn up plans to turn an abandoned garage block on the city’s Park Hill estate into temporary studios and a gallery for local artists.

The 1,000sq m site will be given over to local art group S1 Artspace while a new permanent arts venue is built within the estate.

Tony Broomhead, founder of OS31, said: “The studios are for artists both established and straight out of University, all of which work in different media. The aim was to create a simple design that allows for different working methods and for the artists to take ownership of the space.” It will include 16 studios and a public gallery. 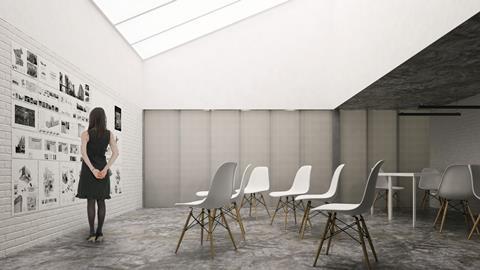 The temporary venue will include a public gallery

The regeneration of grade II* listed Park Hill began in 2007 with phase one comprising 260 homes and 10 contemporary workspaces.

It is being masterminded by developer Urban Splash with a team led by Mikhail Riches with Hawkins Brown and Studio Egret West all working on the remaining phases of the scheme which is expected to complete in 2021.