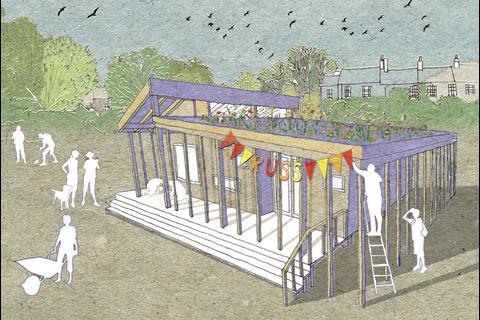 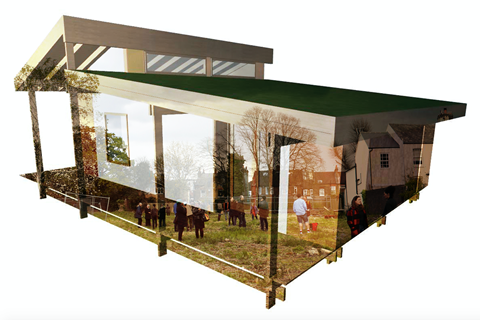 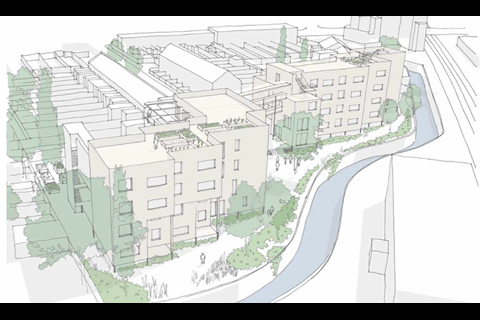 The 33 affordable homes planned for the Church Grove site in Lewisham.

A crowd funding initiative has been launched to finance London’s first training facility for self-builders.

The centre’s design is inspired by Walter Segal, the architect who pioneered self-build housing systems.

The single-storey training facility will be constructed in Ladywell, Lewisham, using self-build principles, not far from three other locations in the borough where Segal-designed homes were erected in the 1980s.

The Church Grove site will also feature 33 affordable homes in four-storey blocks, designed by Architype, which will be partly self-built, and the training centre will be used by construction workers during the build programme. On completion, the facility will continue to be used for self-build training and as community space for the new homes.

The project is being driven by RUSS (the Rural Urban Synthesis Society), a south London-based community land trust, which signed a development agreement with Lewisham Council in April 2016 for the housing scheme on a derelict former school and industrial site.

The crowd-funding target for the new training centre is £57,000, the estimated cost of the construction materials.

RUSS chair Kareem Dayes said: “Lewisham has a history of self-building. In 1985 a group of council tenants with no previous building experience built their own homes on land provided by Lewisham Council. They were led by architect Water Segal who developed a simple and cost-effective building design that anyone could self-build.”

RUSS trustee Ted Stevens added: “The number of self-built homes is set increase by 6-7% every year; and at any one time there are more than a million people in the UK who want to build in the next 12 months, with more than 100,000 in London. Building in London is especially challenging, but the RUSS group is making it happen and is keen to pass on its learning and knowledge to other Londoners.”

Graziano Milano, who is overseeing the crowd funding campaign, said: “We plan to use the space to test ideas. We will also consult with the local community on our goal of creating a permanent community space that can bring new residents and the existing community together.”

Architect Megan Ancliffe, who worked on the team which developed the design for the training facility, said: “The project will offer people the opportunity to get hands-on experience of building. The structure will showcase different natural building techniques such as timber, straw bale and rammed earth.

“Once built, the space will host RUSS’s School of Community-Led Housing with the goal of becoming a knowledge hub to share and inspire other communities in self-building and affordable housing projects.

“We intend to source materials locally so that we support the local economy. We also aim to use as many reclaimed and recycled materials as we can and we’re interested in experimenting with off-grid technologies such as rain water collection.”

More information about the Church Grove self-build scheme and the crowd-funding initiative can be found here.