Historic England adds round of modern boozers to the tab 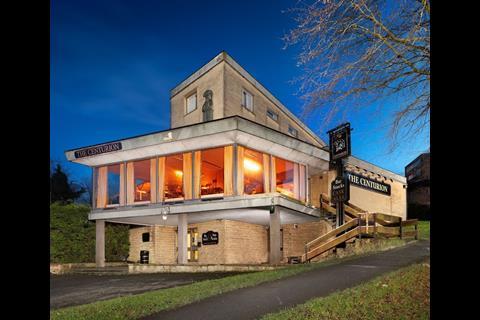 Exterior of the Centurion pub in Bath, which was listed at grade II in April. Historic England said it was built to the designs of HR Robinson of West Country Breweries and JF Lachlan of Whitbread in 1965-66. 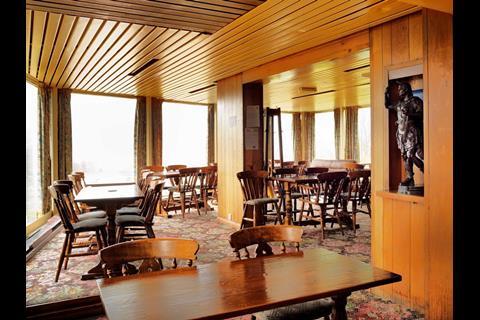 Interior of the Centurion pub in Bath, which has just been listed at grade II. 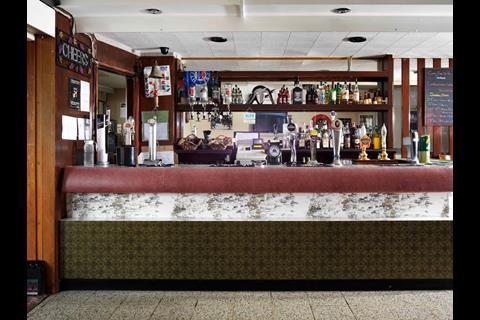 Bar area of the Centurion pub in Bath, which was built in the mid-1960s and has just been listed at grade II 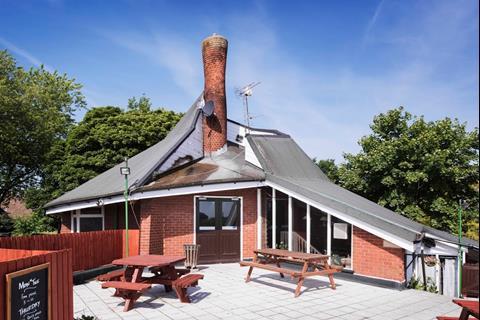 The Crumpled Horn pub in Swindon, which has just been listed at grade II. The pub was designed by Roy Wilson-Smith and inspired by the nursery rhyme The House That Jack Built. It opened in 1975. 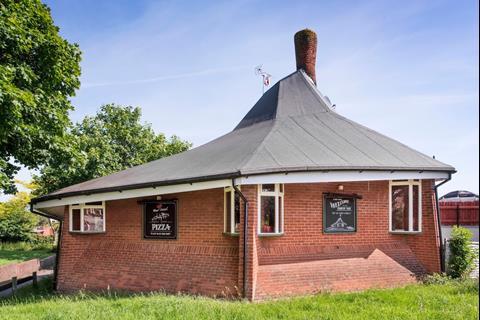 The Crumpled Horn pub in Swindon, which has just been listed at grade II. 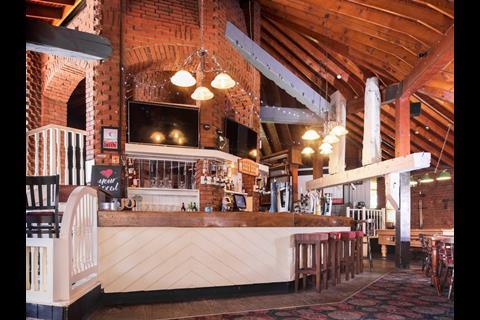 Inside the Crumpled Horn pub in Swindon, which has been given grade II listed status. The single-bar pub is described by Historic England as boasting spiralling 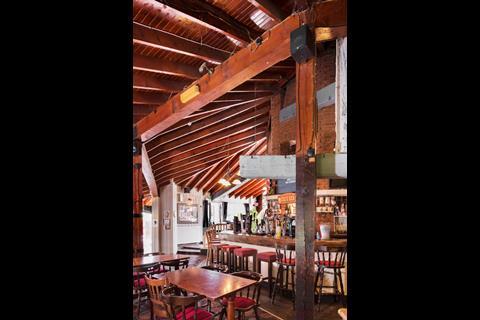 Inside the Crumpled Horn in Swindon, designed by Roy Wilson-Smith. 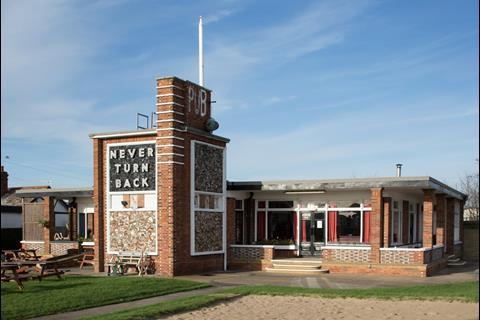 The Never Turn Back pub at Caister-on-Sea near Great Yarmouth, which opened in 1957. It has just been listed at grade II. 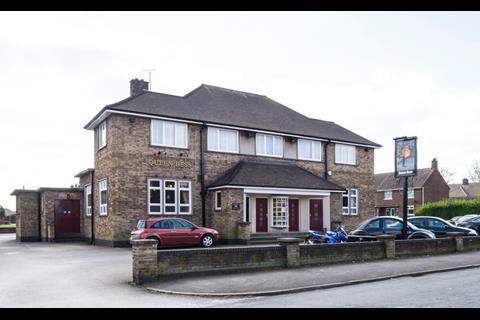 The Queen Bess pub in Scunthorpe, which is now listed at grade II. It was designed by Doncaster architects Wilburn and Son for Samuel Smith's Brewery of Tadcaster and opened in 1959. 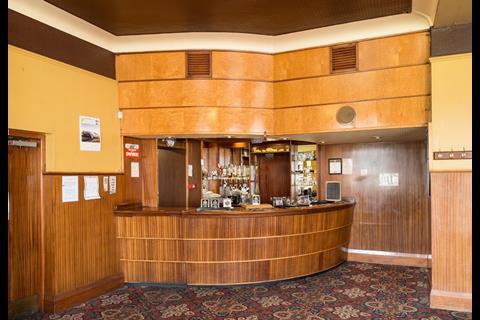 The lounge bar at the Queen Bess pub in Scunthorpe, designed by Doncaster architects Wilburn and Son for Samuel Smith's Brewery of Tadcaster. 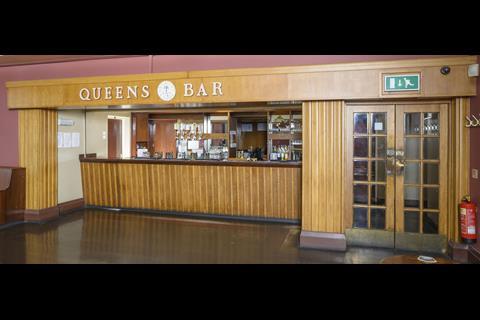 The Queen's Bar at the Queen Bess pub in Scunthorpe, which is now listed at grade II. It was designed by Doncaster architects Wilburn and Son for Samuel Smith's Brewery of Tadcaster and opened in 1959. 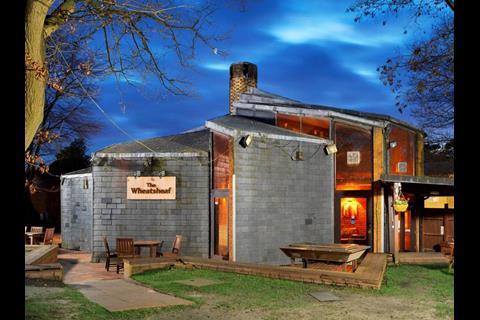 Exterior of the Wheatsheaf pub in Camberley, which has been listed at grade II. Designed by John and Sylvia Reid the pub was built in 1970-71.

The Department for Digital, Culture, Media and Sport has endorsed the listing of a round of post-war pubs selected because they represent a new era of optimism, humour and a more modern take on the place of the boozer in society, exemplified by the “estate pub”.

Historic England’s advice has seen five prime examples of mid-20th-century pubs recognised for their flair with granted grade II status – including two themed watering holes, a pub commemorating a lifeboat disaster, another honouring a local blast furnace and another specifically designed to maximise its corner count.

The themed pubs are the Roman-inspired Centurion in Bath, which features a large bronze figure of a namesake officer on its exterior and a statue of Julius Caesar in the lounge, and the Crumpled Horn in Swindon, the design of which was shaped by nursery rhyme The House That Jack Built.

Less light-heartedly, the Never Turn Back near Great Yarmouth marks the Caister Lifeboat disaster of 1901 in which nine men died; while the Queen Bess pub in Scunthorpe is named after a blast furnace at the nearby Appleby-Frodingham steelworks.

The Wheatsheaf pub in Camberley, Surrey, meanwhile features decagonal ratchet-wheel layout that maximises the number of corners for private drinking. 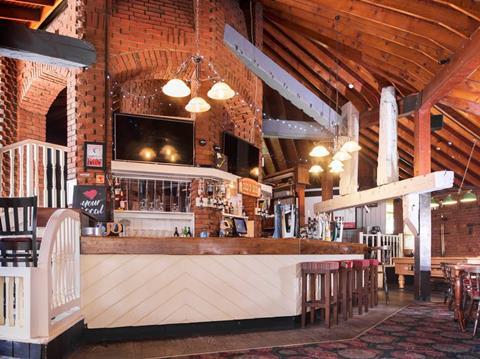 Inside the Crumpled Horn pub in Swindon, designed by Roy Wilson-Smith

Historic England chief executive Duncan Wilson said pubs were constructed in their thousands in the post-war years on new housing estates and in city areas damaged by wartime bombing.

He said that building restrictions meant that most pubs constructed between 1945 and 1954 were temporary, or built so as to be capable of future extension, while the following three decades saw a new generation of neighbourhood pubs built at a time when they came to be seen as a “fully accepted social amenity” for the first time.

“Pubs were springing up in their thousands from the mid-1950s and became the hub of communities,” he said.

“From the Crumpled Horn to the Never Turn Back, these five fascinating post-war pubs are among the best surviving examples of a building type which is embedded in English culture.”

Historic England said that the rise of the themed pub seemed to stem from the mid-60s in the face of growing competition from alternative drinking venues such as clubs, bars and discos.

Part of the Twerton estate, the Centurion public house was built in 1965 by HR Robinson of West Country Breweries on an exposed sloping site with extensive views towards Lansdown. In addition to its bronze sculpture of a Roman Centurion at first-floor level and a statue of Julius Caesar in the lobby to the former buttery bar, the Centurion boasts a portion of Roman mosaic floor that is framed and hangs on the wall in the pub’s entrance hall. The core of the building is a rectangular block of four floors, clad in reconstituted Bath stone. 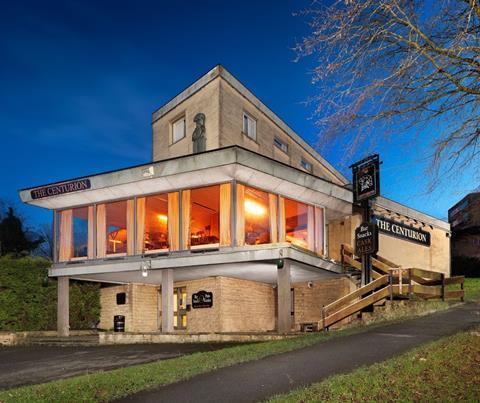 Exterior of the Centurion in Bath

The Crumpled Horn is an estate pub, commissioned by the brewery Watney Mann as a Wessex Taverns house and was designed by Roy Wilson-Smith. It opened in December 1975. Wilson-Smith designed several nursery-rhyme themed pubs for the brewer, but the Crumpled Horn is the only survivor. Built as an irregular eight-sided polygon on a sloping site, the pub contains a single bar area which takes the unusual plan form of a spiralling “nautilus shell”, creating intimate drinking spaces on different levels, as well as reflecting the “horn” of the pub’s name. Wilson-Smith gave the building a conscious air of eccentric craftsmanship in its asymmetrical roof and ramshackle brickwork, all in reference to the rhyme. 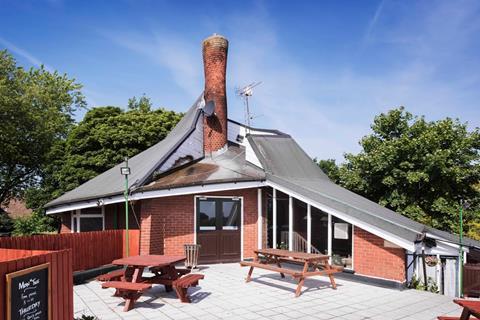 The Crumpled Horn pub in Swindon

Designed by AW Ecclestone, chief surveyor of the brewer Lacons, the Never Turn Back public house opened in 1957 and was named as a memorial to the Caister Lifeboat disaster of 1901. Ecclestone was influenced by the moderne and art deco styles and developed a distinctive local style that had a focus on traditional materials. The Never Turn Back’s tower is designed to resemble a ship’s wheelhouse and a lookout tower, and is visible from the adjacent sand dunes. Among the most striking elements of the pub’s interior are the half-height upholstered “baffles” in both bars that separate the flow of customers entering from those waiting at the counters. 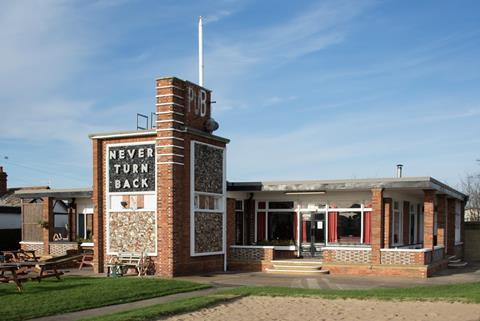 The Queen Bess is named after a record-breaking blast furnace at the nearby Appleby-Frodingham steelworks, which by 1945 was the largest works of its kind in Britain. Built for the Samuel Smith’s Brewery of Tadcaster, it opened in 1959 and is one of the best-preserved surviving examples of a pub built by a major brewery in the decades after the Second World War. Original features still in situ include bar counters, back bars, fixed seating, door joinery and other furniture, all described by Historic England as being of an “unusually high quality and almost unaltered”. The pub is still owned by Samuel Smith’s. 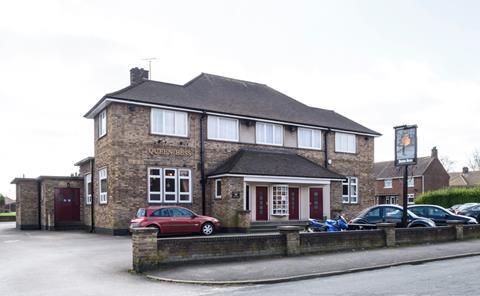 The Queen Bess pub in Scunthorpe

Built in 1970-71 to plans by renowned pub designers John and Sylvia Reid, the Wheatsheaf was envisaged as part of a commercial precinct serving the housebuilder Bovis Homes’ new Heatherside estate. The Reids were given a free hand on the size, style and form of the building, which was to be a focal point for the estate and a central social hub. The result was an experimental design featuring a decagonal ratchet wheel layout, around a central chimney column, and a stepped roof profile which created spaces filled with glazed panels, forming a series of windows at high level. Their thinking was that pub users wanted simultaneously to be among a crowd but also in their own intimate area, hence the creation of a single open bar space with as many alcoves as possible. The Wheatsheaf retains its 1970s palette of materials: woodwool ceiling panels, exposed brick, and quarry tiles. But Historic England said it was the only one of the Reids’ pubs to survive intact. 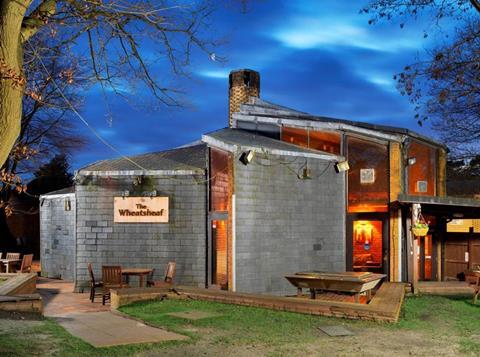 The Wheatsheaf pub in Camberley