Simon Bayliss, managing partner of HTA Design, said: “Unfortunately our kitchens are shut and so we have furloughed our four chefs in London and Edinburgh and a few other front-of-house staff that we were not able to find alternative roles to fill.

“With many of our projects subject to secured funding and long-term programmes I’m pleased to say that so far not too many of our projects have been affected. However it is obviously quite early days and we will continue to monitor matters very closely and I’ve no doubt it may well change over the coming weeks or months.”

Zaha Hadid Architects is one of many leading practices that have said they are putting staff on furlough.

Grimshaw, BDP, Sheppard Robson, Broadway Malyan and Scott Brownrigg all confirmed they are taking advantage of the chancellor’s job retention scheme, while others like Allies & Morrison are considering it.

From global multi-disciplinary Atkins to small design practices like Ash Sakula, architects of all sizes are signing up for Rishi Sunak’s deal in which 80% of their staff’s wages can be underwritten by the state for at least three months. The scheme was announced by the chancellor at a Downing Street press conference on March 20 in an unprecedented bid to stop thousands of firms going bust and causing the economy to collapse. Some nine million Britons are predicted to be furloughed, at a cost to the taxpayer of £30-40bn over the initial three months. Sunak said the scheme would be extended if necessary.

Last week Foster & Partners was the first big practice to announce it was putting staff on furlough and asking everyone in the company to take a 20% paycut, with the RIBA following, saying it was standing down around 30% of its UK staff.

Building Design contacted leading practices at the end of last week to establish who is already taking advantage of the scheme. Of the 12 that responded immediately, all but three said they have or will be furloughing staff, with at least one of the others actively considering it.

At Zaha Hadid Architects a small number of staff have been furloughed but there have been no redundancies or pay cuts – and it is planning to recruit more staff in China where it has won new work.

A spokesman said: “As all our 348 London-based employees are currently working from home, 15 of our office maintenance team-members are furloughed at this time because it has not been possible for these particular support staff to carry out their work while away from the office.”

He added: “Our offices in China have now reopened with all staff returning and we are planning to enlarge their teams due to increasing workloads. We’ve recently been awarded new cultural and corporate projects in China.”

Broadway Malyan said 10% of its staff in the UK and Spain – the only countries with government assistance packages – had been furloughed, a total of 22 people.

A spokesman said all staff in Singapore and Shanghai took a 15% pay cut in February and March, and it is currently consulting on the introduction of a similar temporary measure across the entire practice from this month.

“However, we will not reduce any salary that would fall below the agreed minimum salary in any of the countries we operate,” he added.

Allies & Morrison said it was furloughing some staff but had not made redundancies. Like others, it said it was still winning work as well as delivering existing projects.

Grimshaw said it was looking at putting a number of staff on furlough and reducing hours for some others. It is making no redundancies as a result of the pandemic but early last month it began consulting with staff over what it said could be more than 20 possible redundancies after the Court of Appeal ruled the government’s airport expansion policy was illegal. 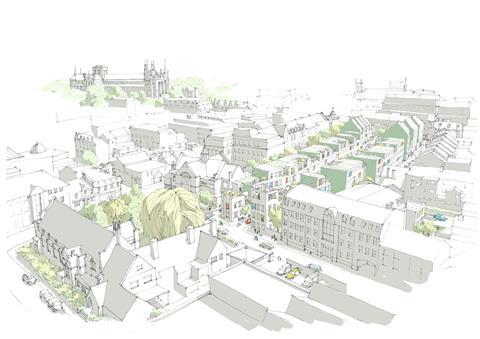 Drawing by Ash Sakula, part of an initial feasibility study for the possible redevelopment of Peterborough’s former Beales department store which the practice is now expecting to take forward to planning.

Robert Sakula, co-founder of Ash Sakula, said: “We reluctantly decided to furlough two staff for at least three weeks. But work is still coming in, so we are hopeful for the future, and our plan is to bring them back in asap.” One of the practice’s current projects is a feasibility study for the redevelopment of a department store in Peterborough (see image) which it is now expecting to take forward to planning.

At Sheppard Robson partner Alan Shingler said while they were still taking enquiries, work on some sites had stopped which was impacting on workloads.

He said: “Therefore, it has become necessary to furlough some members of our technical team and also some central staff whose roles are not required while we are working remotely.

“We want to do everything we can to ease the stress on our team in these uncertain times while also protecting the health of our business. We are currently topping-up all our team’s income to ensure they receive 80% of their full salary and that all our members of staff receive at least the London Living/National Living Wage (depending on location of office). This was communicated to our entire team on a video call. We have not made any redundancies or pay cuts at this time.”

BDP’s chief executive, John McManus, said they had begun a furlough consultation that was likely to affect all its UK offices.

He added: “The economic impact of the coronavirus pandemic on the entire construction industry has led to our decision to furlough a number of staff during the lockdown period. Our priority at this point is to protect jobs and retain our talented staff during this unprecedented global crisis.”

AHMM also said it had furloughed anyone who was unable to work from home, while Benoy has furloughed 26 people with a further four losing their jobs.

Scott Brownrigg said it had furloughed a “small percentage of staff at the moment” but had not made any redundancies. “We are looking at lots of ways to ensure we come out of this as strong as we possibly can,” said a spokeswoman.

Atkins said in a statement: “Where it is not possible for employees to carry on productive client work in the short term, temporary remedial actions are being taken, including reduced hours and where necessary, employee furloughs.”

Purcell and Stanton Williams both said they were not furloughing staff at the moment.

Squire & Partners declined to comment and others had not responded at the time of publication.

What about your practice? Email Building Design’s newsdesk at elizabeth.hopkirk@bdonline.co.uk