RIBA has added its voice to the growing clamour warning the government that its plans for future house-building could be disastrous for the environment.

Ministers are proposing changes to the Future Homes Standard, a new set of house-building regulations due to take effect from 2025.

A public consultation has been underway over parts F and L of the the regulations, which affect energy efficiency and ventilation respectively.

RIBA president Alan Jones said the proposed changes were “simply not ambitious enough to meet the scale of our environmental challenge”.

He added: “If we are to stand a chance of meeting net zero by 2050, the government must urgently embed much clearer and more demanding targets on operational energy and embodied carbon into building regulations.” 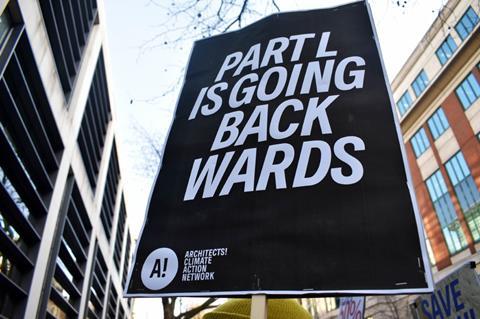 In its response to a public consultation on the proposed changes, RIBA warned ministers that it would be more expensive to retrofit efficiency measures than to do it during construction. “Keeping the fabric energy efficiency target is a positive measure to ensure that energy-efficient fabrics are chosen for new homes,” it said.

Jones said any chance of meeting the planned net-zero target by 2050 relied on the government urgently embedding much clearer and more demanding targets on operational energy and embodied carbon into building regulations.

Operational energy (energy used at the meter) should be used as the principal metric for determining the energy efficiency of buildings, he said.

“They must also crack down on loopholes which are exploited by developers to build new homes according to regulations from the time they first broke ground, often years out of date,” he added.

The London mayor said the government’s proposals were short-sighted and set carbon reduction targets for new homes that were 25% lower than London’s Zero-Carbon Home standard introduced in the mayor’s 2016 London Plan.

Writing to housing secretary Robert Jenrick, the mayor said the proposed re-jig of Part L “would create uncertainty and confusion among housebuilders in London”.

The reactions follow protests by climate-change activist architects last month, who warned the proposals could be potentially disastrous for carbon reduction if they are implemented.

This was followed by a tug-of-war protest last week outside the Ministry for Housing, Communities and Local Government (MHCLG) organised by Extinction Rebellion with ACAN, the Architects’ Climate Action Network.

This was intended to highlight the struggle between local authorities pushing for higher climate targets, and central government’s proposals to prevent them from doing so.

At the same time ACAN wrote an open letter to the two ministers responsible for building regulations, expressing concern over the government’s proposed changes to Parts L and F. The letter was signed by more than 500 people, from directors and staff of Stirling Prize-winning practices to members of the public. 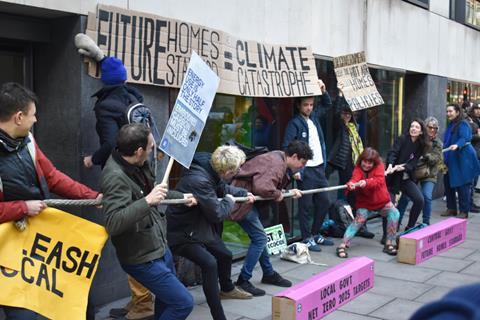 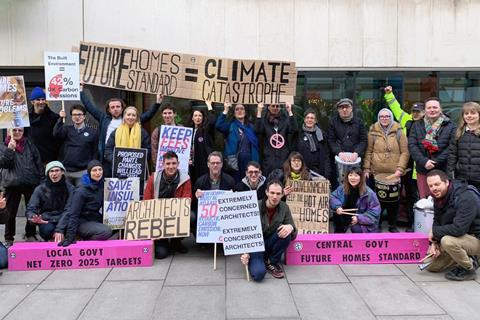 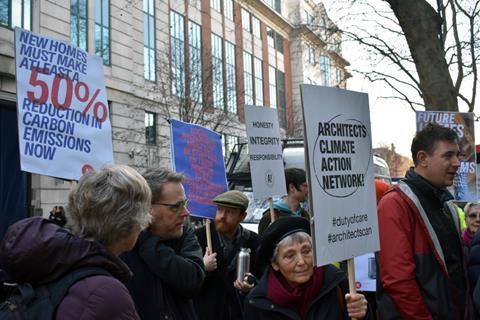 “We are writing to you regarding the current government consultation on changes to Part L and Part F of the Building Regulations to be included in the proposed Future Homes Standard.

As a group of professionals working in the construction industry we are extremely concerned about the proposals. We feel that they are completely inadequate in the context of the climate and ecological emergency as declared by parliament, and will act as a barrier to the UK meeting its carbon emissions targets.

The environmental impact of construction and the built environment is extensive; accounting for around 40% of the UK’s carbon emissions. In light of the IPCC’s recommendation that global emissions need to be halved by 2030, it is vital that industry regulation is commensurate with the significant share of emissions that the sector is responsible for.

Our four main areas of concern with the proposed standard are as follows.

1) The Fabric Energy Efficiency Standard (FEES) should not be scrapped. It should be kept and upgraded with greatly improved fabric performance targets that go much further, reducing the energy use of all new homes designed in 2025 to net zero.

2) Energy consumption reporting should be easily understandable.The use of carbon factors as proposed in this consultation is a step backwards and will disguise poor fabric efficiency through over-reliance on a decarbonised grid. Under the proposed regulations, new homes may end up using more energy than those built to 2013 regulations.

3) Ambitious local authorities should not be stripped of their powers to set higher energy efficiency standards. Leaders in climate innovation should be supported at this time of greatest need, and the 65% of local authorities that declared climate emergency in 2019 will be unnecessarily held back by this change. The UK will miss legal climate targets without this urgent action.

While we welcome the consultation, the scale of destruction wrought globally by the climate crisis is shocking in its speed and severity, and our response must be proportionate. We urgently require far reaching changes to the regulatory landscape, but we urge you to reconsider the current proposals laid out for the Future Homes Standard. With 150,000 houses built every year, it is imperative that government policy reflects what the UK needs now and in the future to reach our carbon emissions targets.”