Looking north from the Liver Building towards Bramley-Moore Dock

Everton FC has said the public will get a long-awaited first look at architect Dan Meis’ proposals for its new stadium next month – and that the venue will be “unique yet respectful” of Liverpool’s Unesco World Heritage Site status.

US-based Meis is working with Sheppard Robson on proposals for a 52,000-seater stadium for the Premiership club, which will see it relocate from its current Goodison Park home to Bramley-Moore Dock, around 1.5 miles from the city’s Pier Head.

In an update on the project, Everton’s stadium director Colin Chong said the latest stadium concepts were “on track” to be released for a new round of consultation towards the end of next month. 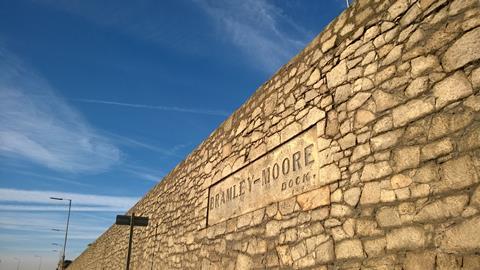 Chong said project architect Meis has consistently spoken about how the new stadium should reflect the “impressive location” of the World Heritage Site, which includes the grade I-listed Royal Liver Building, and the grade II* Cunard and Port of Liverpool buildings at Pier Head.

“There is a lot of material and architectural inspiration in that area to consider and that will allow us to look to create something unique yet respectful of its environment,” he said.

“At the moment, Bramley-Moore Dock is not open to the public so it’s perhaps difficult to appreciate the site’s rich heritage.

“Through our proposed stadium design, the club’s plan is to recognise the dock’s unique attributes, accentuating and preserving them and making them accessible for everyone to enjoy.”

Everton agreed a 200-year lease on Bramley-Moore Dock with Liverpool Waters developer Peel Holdings in 2017, with the deal contingent on the stadium plans getting planning permission.

Over the past two years Liverpool City Council has come under fire from Unesco over the impact of new development – particularly high-rise buildings – on the World Heritage Site. At one stage it was threatened with losing the status if a tighter regime on new development was not introduced.

In January, Sheppard Robson said it hoped to lodge the stadium proposals on which it is collaborating with Meis before the end of this year.

Everton is also developing legacy plans for its current Goodison Park home, which is around three miles north-east of Liverpool city centre.

The project is expected to include health amenities, education facilities, community space, enterprise hubs and homes.