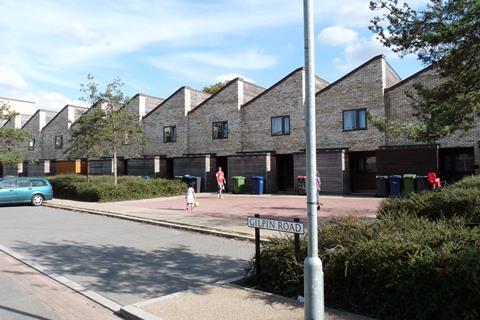 The profession has given a lukewarm welcome to the government’s new National Design Guide which was launched this week – pointing out that it doesn’t contain the word “architect” once in its 65 pages.

The National Design Guide: Planning Practice Guidance for Beautiful, Enduring and Successful Places was announced by new housing secretary Robert Jenrick at the Stirling Prize ceremony as part of the government’s commitment to building homes of greater quality and quantity.

It forms part of a revised suite of planning practice guidance (PPG) being issued by his department (the MHCLG) to support the National Planning Policy Framework (NPPF). Its chapters are centred around 10 characteristics of well-designed places that contribute to the themes in the NPPF.

The visual guide was produced by Tibbalds and the Design Council after a procurement exercise which followed the widely welcomed appointment of former PRP chairman Andy von Bradsky as the government’s head of architecture. He and the chief planner, Steve Quartermain, were both at the Stirling dinner where Jenrick applauded the winner, Goldsmith Street social housing by Mikhail Riches and Cathy Hawley.

It was von Bradsky’s former colleague, senior PRP partner Brendan Kilpatrick, who noticed the absence of the word “architect” in the new guide.

This, he warned, “presents the grave risk that, more often than not, the guide and its defining characteristics will be only so much as 10 precious seeds cast on stony ground”.

He praised its clarity and good intention as well as the well-constructed examples which “allows for further reference” and said: “Any design guide that promotes beautiful, enduring and successful places is worth picking up, especially if it comes from government. Such things are rare.”

But, aside from highlighting good practice, the guide said nothing about how its lofty aspirations could be achieved, he added.

Jo McCafferty, a director at Levitt Bernstein, called it a welcome addition to the existing NPPF but said “much, much more needs to be done to bring ambitious environmental performance and social sustainability into large-scale, mainstream development – and this will mean regulation and not just guidance”.

While not offering anything ground-breaking, she praised it for reinforcing the principles of good design “which still seem to disappear from so much new development across the country – so anything that raises the bar should be supported”.

She added: “As the contents of National Design Guide can now be used as a material consideration in national planning applications and appeals, this should help support the case for good design at officer and committee level.”

Douglas McIntosh, a director at Mae Architects whose Caudale housing in Camden is singled out for praise in the guide, noted that the introductory paragraph refers to Vetruvius’ 2,000-year-old definition of good design. “While this has stood the test of time, I feel the introduction should have reflected a contemporary version tuned to the climate emergency and the challenges we all face,” he said.

“Places and buildings are going to look a lot different in the future so a clear link or thread between all 10 characteristics in the guide that puts the climate emergency at the forefront is a must, or at least an addendum!”

He also suggested the guide’s title, Planning Practice Guidance for Beautiful, Enduring and Successful Places, “should read that places will only be beautiful and successful if they endure”.

Meredith Bowles, founder of Mole Architects, said the guide was unnecessary. “We have design guides coming out of our ears,” he said. “If the government think this will improve the quality of places they need to think again and give more power and money to local authorities to make long-term decisions and investment.”

But Chris Medland from One World Design was more positive, saying: “On my first pass it looks like it will help us architects add weight to what we already do, and be a tool in persuading clients and local councils alike of the design approach taken. Common sense stuff and a healthy lack of pastiche precedent images.”

And Tara Gbolade founder of Gbolade Design Studio and a finalist for BD’s Female Architecture Leader award this year, said: “While the information within the guide doesn’t bring any new ideas that good consultant teams don’t already consider, it does collate most of the relevant information in one place that’s useful to both applicants and local authorities.

“Particularly in our current state of flux with many local authorities updating local plans, this offers a material consideration which carries weight to promote good design principles, and offers us the optimism to see the government as promoting good design, particularly in the face of changing permitted development rights.”

In his Stirling Prize address new RIBA president Alan Jones said, to cheers: “I welcome the government’s new design guidance but the future extension of the permitted development loophole where projects can bypass environmental quality and standards is an example of poor regulation failing the public.”

His immediate predecessor Ben Derbyshire said afterwards: “It’s important that there’s at least a simple ‘what good looks like’ tool for local authorities who struggle with resources and skill to understand the interpretation of the NPPF.

“The danger of course is that it’s perceived as being too formulaic, but let’s see how it goes.

“And this paradox of building beautiful at the same time as allowing unfettered permitted development is something we need to keep confronting [ministers] with. It’s crazy to have them both potentially on the same statute books.

Jane Dann, director of authors Tibbalds, said it was aimed at planning officers, councillors, applicants, their design teams and local communities and intended to help them “ensure quality is embedded in policies, guidance and projects”.

She said: “Design quality is so important but can also be very difficult to articulate. This guide is designed to provide a common framework for identifying, assessing and discussing design quality.

“It clearly sets out what the government expects to see in new developments and how to achieve the standards that will create successful buildings and places in the long term.

“It gives those bringing forward new proposals more certainty about what is expected and acceptable to help make the planning and delivery process smoother.

“It also provides a starting point for local authorities and communities to prepare their own tailored design guides that focus on what makes their local area special and distinctive.”

The guide - while coming out of the same ministry that set up Roger Scruton’s Building Better, Building Beautiful Commission - is not part of the BBBBC’s output. The commission, which is co-chaired by Nicholas Boys Smith of Create Streets, is due to report in December. Its interim report can be read here.