The Greater London Authority has announced the publication of the London Plan. It means the document, which sets out proposals to build 52,285 homes annually in the capital for the next 10 years, formally takes effect. 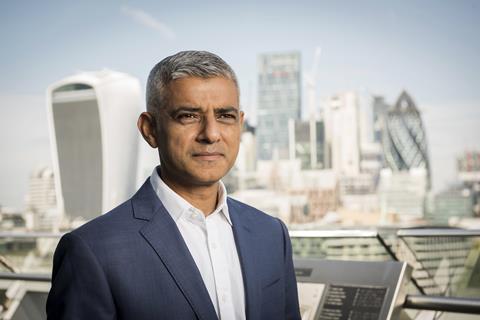 The 500-page plan, four years in the making, was the subject of a furious row over the capital’s housing policies between the London mayor Sadiq Khan and housing secretary Robert Jenrick and another with his predecessor James Brokenshire.

Khan also had to fight to hang on to the so-called architect retention clause which so delighted the profession when it was first revealed in the 2017 draft. It survives, albeit merely as a suggestion (see text below).

The mayor said yesterday that publication of the plan marked the beginning of a “new era for our city”.

Khan was forced to revise down his original proposal for an annual target of 65,000 homes after a panel of inspectors concluded that it was unrealistic, given the likely supply of sites, without building on the green belt – something he had pledged not to do.

The plan introduces policies designed to protect the green belt, improve the capital’s air quality and make London a zero-carbon city by 2030. It brings in a long-term target for 50% of homes in new developments to be affordable.

It sees the biggest allocation of new homes going to the boroughs of Tower Hamlets and Newham, which will each be expected to accommodate more than 3,000 new homes annually.

Outside of the City of London, the smallest housing allocations are in the wealthy boroughs of Richmond, Kensington & Chelsea and Sutton, each of which will provide fewer than 500.

The publication comes a month after Khan adopted the plan, putting an end to 18-months of wrangling over the final shape of the document following a critical inspector’s report. This time last year Jenrick accused Khan of presiding over a “deeply disappointing” level of housing delivery since coming to office in 2016, with an average of 37,000 homes produced annually.

>> From the archive: Architects hail London Plan as ‘beginning of a renaissance’

The secretary of state called for a series of changes to the plan. However, like Khan, he fell short of accepting the inspector’s recommendation of a green belt review to accommodate the assessed need.

The plan for 52,000 homes a year – even if delivery is achieved – will leave London’s housing delivery significantly below both the GLA’s assessed need of 65,000 homes, and the number called for by the government “standard method” for adopting housing need.

According to the final version of this, published in December, London needs to deliver 93,579 homes per year, 78% above the London plan target and well over double the current rate of delivery.

>> Duncan Bowie: The new London Plan has got it wrong on density

Writing to Khan this year, Jenrick said he was content for the plan to be published, but made clear that he still felt the GLA needed to do more to encourage housing delivery. He said: “Notwithstanding the above you still have a very long way to go to meet London’s full housing need, something your plan clearly and starkly fails to achieve.

”Londoners deserve better and I will be seeking to work with those ambitious London boroughs who want to deliver over and above the housing targets you have set them.”

The GLA has previously called for the government to provide funding of £5bn per year – around five times the current level – to free up stalled sites and ensure continued delivery of homes in the wake of the covid-19 pandemic.

3.4.12 Having a sufficient level of design information, including key construction details provided as part of the application, can help to ensure that the quality of design will be maintained if the permitted scheme is subject to subsequent minor amendments. However, it is also generally beneficial to the design quality of a completed development if the architectural design team is involved in the development from start to finish. Securing the design team’s ongoing involvement can be achieved in a number of ways, such as through a condition of planning permission, as a design reviewer, or through an architect retention clause in a legal agreement.