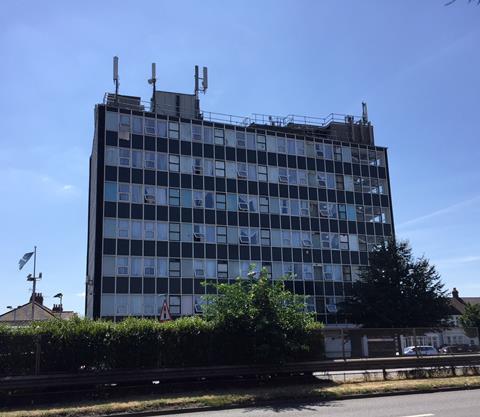 Architect Levitt Bernstein has launched a petition to try and force MPs to debate the impact of allowing offices and factories to be converted into what it calls “sub-standard housing”.

The firm said many of the new homes created by permitted right developments (PDRs), described by some as “21st century slums”, lacked sufficient space and natural light and bypassed national and local policies and standards.

The petition, created by BD columnist and Levitt Bernstein’s head of housing research Julia Park, argued the government’s promise not to sacrifice quality for quantity was at odds with such conversions resulting “in the smallest new housing built with permission in this country”.

Levitt Bernstein highlighted a recent case where permission was initially refused for a developer in Watford to convert a light industrial building into more than a dozen flats, some of which had no windows and were just 17sq m in size, less than half the government’s minimum studio size recommendation.

The developer appealed the council’s verdict and the government’s own planning inspector waved the scheme through.

Levitt Bernstein said such conversions were often in unsuitable locations such as industrial parks and alongside major roads, housing vulnerable people and families. “It has become a matter of huge public concern,” the architect added.

In a separate report on PDRs the firm said it did not have an issue with an office-to-residential conversion when an office was “genuinely redundant … and had the potential to become a good place to live”.

But it added: “Astonishing though it sounds, we believe that many of the new homes created through office-to-resi PDR have serious hazards and are unfit for human habitation.”

Building regulations have never required a living space to have a window. Not because it doesn’t matter, but because no one imagined anyone would offer a home without one

Part of the issue lay with the legislation, the firm said. “Building regulations have never required a living space to have a window, not because it doesn’t matter, but because no one imagined that anyone would offer a home without one.

“Now we know that has become a reality, we need to legislate to prevent it,” it added.

Labour has said it would scrap PDRs if it were elected.

But Akeel Alidina, managing director at Caridon Property, which manages 1,000 low-income homes and has undertaken a number of office-to-residential conversions, said earlier this year without PDRs his firm wouldn’t have been able to create the hundreds of low-cost homes it currently managed.

“Many of these flats house people who would otherwise be sleeping rough on the streets, or stuck in a B&B or hostel.

“By making housing more compact we can make it more affordable,” he added.

The Levitt Bernstein petition is open to signatories until the end of January next year. It needs 10,000 signatures for the government to respond and 100,000 to be considered for debate in Parliament.