Scheme will deliver 678 flats in towers up to 31 storeys

Leeds council has resolved to approve plans by Simpson Haugh Architects for 678 build-to-rent homes in a series of towers of up to 31 storeys.

The Bridge Street scheme, designed for developer Ultra Assets Holdings, contains five towers of between 13 and 31 storeys, and follows the construction of a 190-bed hotel on the southern edge of the same site in 2019. 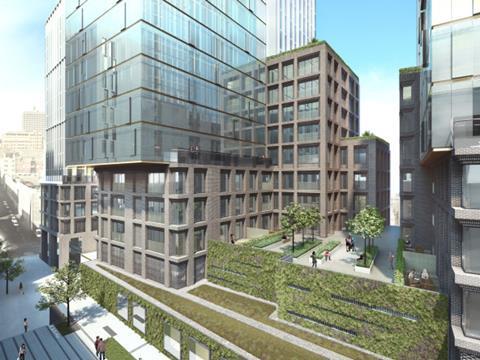 The council’s City Plans committee agreed to delegate the proposals for approval by officers subject to completion of a section 106 agreement, and fulfilment of 48 separate planning conditions.

The council said the developer will have to provide a commuted sum of over £3m to pay for off-site affordable housing, plus hundreds of thousands for highway works and greenspace improvements.

The approval, on a site just outside the city’s inner ring road, replaces an existing permission secured in 2011 for four towers of up to 40 storeys in height.

The new scheme has been supported in principle by Leeds Civic Trust, which said it was “well-conceived”. However, the body raised concerns over the height of the tallest building.