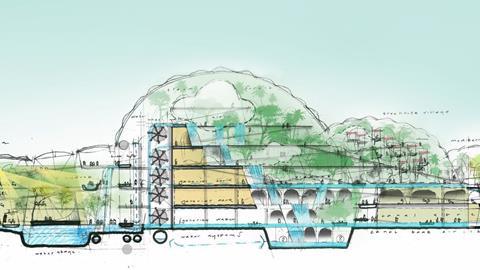 LDA Design to work on first Eden Project outside Cornwall

LDA Design has been appointed to work with Grimshaw on the first of a string of global Eden Projects.

Eden Qingdao on the east coast of China will be the first of three to be opened in the country.

The organisation has also announced plans to open in Australia, New Zealand and Derry in Northern Ireland. Founder Tim Smit said he wants an Eden on every continent aside from Antarctica, although they won’t all feature geodesic domes.

Grimshaw, the architect of the original biomes which opened in a former china clay quarry in Cornwall in 2001, is working on all of them.

Now Eden has announced LDA Design will be working on the visitor centre at Eden Qingdao, a new ecological park near the port city of Qingdao – home of Tsingtao beer and the largest bathing beach in Asia. It is being developed by Jinmao Holdings.

The site is a large piece of reclaimed, environmentally damaged land originally used for salt production and then prawn breeding. It is located at the confluence of two rivers so the park will explore the theme of water. The project is still on the drawing board but the dome (pictured) will be part of a much bigger site.

“We are thrilled to be part of the design team developing China’s first Eden Project, enabling people to explore and understand what water means for life on earth,” said LDA Design’s Neil Mattinson, senior board director.

“This is a truly amazing part of the world and our aim is to create an unforgettable, rich experience where lasting memories are made at the water’s edge. We hope it will be a place where people return time and again.”

The second major project in China will be in the historic city of Yan’an, known for being the end of Chairman Mao’s Long March. The project has passed feasibility and is ready for planning. It will explore the theme of land and soil and will promote ecological restoration, partly by restoring a degraded site just outside the city into a fertile valley of flowers, agriculture, craft and education.

The third Eden project in China will be at Sheng Lu Vineyard in Beijing. Eden has been asked to provide support in turning the vineyard into a visitor attraction as well as supporting education and offering horticultural and landscaping advice.

In Australia, 15ha of damaged land around the port in Tasmania’s capital, Hobart, has been identified by the Macquarie Point Development Corporation.

In New Zealand, Eden is working with a local trust on plans for a social enterprise and attraction in an area of Christchurch’s earthquake-damaged Red Zone. This Eden Project will explore stories of nature and culture and will include restoration of native ecology along the River Avon shoreline. The project is currently in the early stages of concept development.

Grimshaw partner Jolyon Brewis said they were pleased to have landed the international ventures with Eden Project International Ltd (EPIL).

He said: “Grimshaw’s relationship with Eden Project spans over 20 years and we are proud to help bring Eden’s ethos to new audiences through unique architecture, landscapes and immersive content; all delivered with characteristic joy.”

In its first 16 years, Eden has attracted more than 19 million visitors and generated £1.7 billion for the Cornish economy.