Hopkins to make a splash at PM’s old school 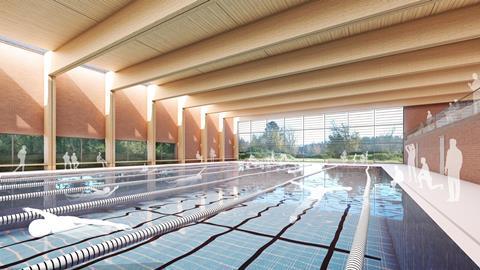 The centre was given the green light in 2018 despite being recommended for refusal by planning officers.

Work is set to start on an indoor swimming pool at Eton College designed by Hopkins two years after consent was given.

The contractor Graham has won a deal to build the facility at the top public school, Boris Johnson’s alma mater.

The three-storey facility, called the Eton Sports and Aquatic Centre, will replace an outdoor pool with a 25m pool with a moveable floor, a four-court badminton hall, a bar and spectator areas.

The new pool is one of two planned sports centres for Eton, where annual fees top £42,000, which were given planning approval by Windsor and Maidenhead council in December 2018 – despite being recommended for refusal by planning officers because they were considered harmful to the green belt.

The other facility, also designed by Hopkins, is an indoor sports centre featuring a rifle range, squash courts and a climbing wall.

Graham is also building two pedestrian bridges and upgrading an access road to the site.