A senior testing technician has blamed a string of apparent errors he made when testing insulation destined for Grenfell Tower on the testing hall being too busy, the inquiry has heard.

Former Building Research Establishment (BRE) burn hall manager Phil Clark told Wednesday’s hearing: “What you need to understand is that the burn hall was a very busy place. We could have 10 people in on any given day.”

The inquiry heard yesterday how Clark had apparently not noticed that a May 2014 fire test of a wall construction that contained manufacturer Celotex’s RS5000 insulation had cement panels of different thicknesses.

Celotex had replaced 8mm cement fibre panels used in a failed test in February of that year with 12mm cement panels, which it hoped would better resist flames. The test passed.

However, in two places on the test rig the panels were 8mm thick and covered 6mm boards of fire-resistant magnesium oxide, a material which was neither logged in official BRE documents nor included in the insulation’s marketing material.

But Clark’s signature has been found on a delivery note for the 8mm panels, despite his claim that he thought all of the boards were of the same thickness. 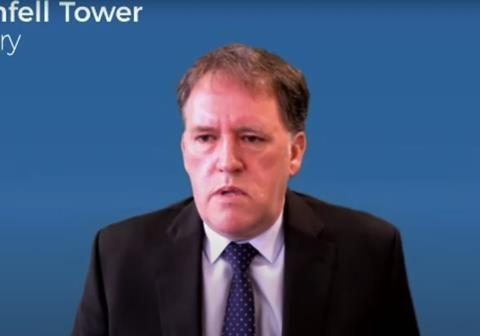 Asked by counsel to the inquiry Richard Millett QC how this “lapse” had come about, Clark replied that the burn hall was “very fluid and dynamic”, adding: “We could have four or five deliveries from drivers directly to the hall, we could have stuff coming in from goods-in, we could have people testing, preparing, so it was a very busy place, and it wasn’t the position that we were there every single minute checking everything that the client did minute to minute.”

On Tuesday, Clark denied being aware of the magnesium boards which were hidden beneath the 8mm cement panels, telling the hearing: “I would have reported it. And had I known it, I would have stopped the test.”

But yesterday the inquiry was shown video footage filmed from Clark’s helmet camera in the burn hall during the May 2014 test in which he told former Celotex assistant product manager Jonathan Roper: “See how that flame seems to have ceased now that the board is there because you’re losing a lot of the energy from behind it.

“The other thing as well is it’s something that’s quite big behind the board [because] it extends the flame vents.”

Asked by inquiry chairman Martin Moore-Bick why had said “now that the board is there,” Clark said: “I don’t know, it’s just speaking - a general conversation.”

And he said when he had talked about something behind the board he had been referring to flames.

In another exchange captured in the footage, Clark had said “Sometimes changing two things at a time doesn’t always give you an advantage.”

Millett suggested this had referred to the two changes in the test - the magnesium boards and the thicker 12mm cement panels.

But Clark denied he knew two things had changed in the construction of the wall being tested and said he was only referring to “the scientific principle that if you change two key items, two key variables, you don’t know which one has had a positive effect.”

Clark was later accused of giving false evidence to the inquiry after claiming on Tuesday that he had been given “no access” to files on the BRE systems when preparing his witness statement.

He had told Tuesday’s hearing: “One of the things you need to be aware of is that post the fire at the tower, all of the systems that - both paper and electronic - were locked down at BRE, so I had no access to any files on any of the systems. So anything that I was given, I was reliant on BRE to provide me.”

But it was revealed that the BRE’s lawyers from Fieldfisher had sent a letter to the inquiry earlier in the day that stated that Clark had in fact been given full access to BRE documents for a three-day period in July 2019 while he was preparing his witness statement.

Millett asked if Clark had attended the BRE’s site. Clark replied: “I did for about one or two days, maybe.”

Millett said: “[The BRE’s lawyers] say it was a three-day period.”

Millett then asked: “When you told us yesterday in your evidence that you were reliant on what was sent to you, you were issued a packet of stuff, material was disclosed by the Inquiry, and you had no access to files after the fire on any of the systems, that’s not true, is it?”

Clark replied: “Yes, no, I’d neglected to - I forgot that I - I understood that I went down there, but what I meant was I had - because I was only there - I could only review a certain amount of stuff.”

He added: “I just forgot I’d gone there. I’ve never been in this situation. I don’t know what’s relevant.”

The first phase of the inquiry into the June 2017 fire, which killed 72 people, found that the insulation included in the building’s cladding system ”more likely than not” contributed to the spread of flames up the side of the tower.