Grenfell client was warned project would fail without fundamental reappraisal

The Grenfell Tower refurbishment project would fail unless a fundamental review of its scope was carried out, a consultant working for the client warned at an early stage.

Cost consultant Artelia said re-procuring the main contractor in a bid to reconcile a £2m budget shortfall was not the right solution because replacing Leadbitter would “incur additional time and expense” and there was no guarantee another contractor would be better.

Instead Artelia argued that a far more fundamental reappraisal of what was achievable for the money the client was prepared to spend was necessary, the inquiry heard on Monday.

In a status report on April 23, 2013, Artelia told Kensington & Chelsea Tenant Management Organisation (TMO): “Unless the project, in its current guise, is stopped and a review embarked upon to redefine the scope, programme and cost, it will fail.”

Yet a month after that report Artelia wrote a new recommendation promoting the idea of re-procuring the work. 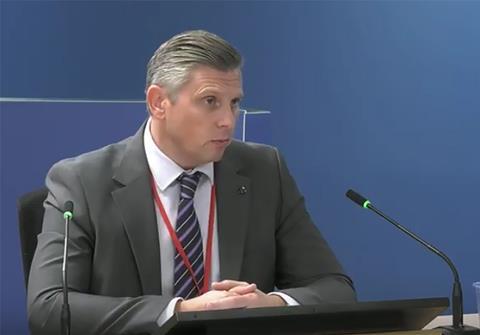 Paul Dunkerton, the first of the TMO witnesses to give evidence to the inquiry into the events leading up to the deaths of 72 people in June 2017, agreed with inquiry barrister Andrew Kinnier QC on Monday that this was a “volte-face”.

It happened after a meeting where the TMO explained to Artelia that its priorities had changed, with “value for money [not programme] now the primary driver for the project”.

The inquiry was shown an internal Artelia email describing the TMO’s project lead, Peter Maddison, being over-ruled by Laura Johnson, the council’s director of housing and therefore the project’s funder.

She was already engaged in a confrontation with Leadbitter over cost issues on the Kensington Academy and Leisure Centre (KALC), a related project next to Grenfell Tower, the inquiry has heard.

Leadbitter was originally to be the contractor on both projects but had priced  the Grenfell Tower work at more than £10m which was well above Artelia’s estimate – which itself was higher than the TMO’s budget of £8m – triggering a value engineering process.

The inquiry was shown an email from Alun Dawson of Artelia – previously known as Appleyards – in which he asked architect Bruce Sounes of Studio E to help address this deficit urgently.

“Can you come back to us with a radical re-think of the scope/spec (whilst still meeting the original brief) by early part of next week to deliver it within budget,” he wrote on February 26, 2013.

Sounes replied the same morning: “It is not really possible to undertake a radical re-think without sight of the figures, a discussion with the client, and the involvement with the services engineer who is not copied into your email. Is the M&E not under review as well?”

The exchange came a month after Sounes had written to the TMO’s Dunkerton, a project manager who said he had a mainly administrative role, pointing out that because of delays in novating Studio E to the contractor – which would have released its outstanding fee – the practice had continued working on it, staffing it with two people full-time.