Developer and contractor Renaker has been given the green light for a pair of 52-storey towers in Manchester.

The £294m scheme is the latest phase of the contractor’s 1.1ha Crown Street development which already has a 52-storey and a second 21-storey tower under construction. 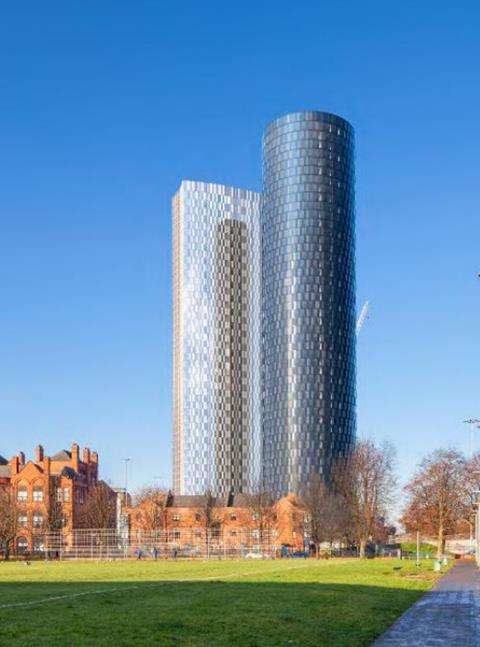 How the two towers, Blade (left) and Cylinder, will look when completed

The site is adjacent to Renaker’s Deansgate Square scheme which contains a further four towers. The tallest, the 201m South Tower, became the highest building in the UK outside London when it topped out in 2018.

Manchester architect Simpson Haugh is behind all four Crown Street towers as well as the four Renaker towers in Deansgate Square.

The two new towers, known as Blade and Cylinder, will contain a total of 855 homes ranging from one to three bedrooms.

Together with the 664-home towers already underway, the Crown Street site will provide over 1,500 homes when complete.

A two-storey podium level connecting the bases of the two towers will house a residents’ lounge, gym, sauna and shops above a three-storey basement containing a 389 space public carpark. The roof of the podium level will contain a resident’s garden.

A £5m public park is included in the plan and Renaker has also agreed to pay £1.75m towards a primary school on the site, which has yet to gain planning permission.

In June the contractor started work on another tower, the 50-storey Greengate HJ designed by architect OMI.