Greater Manchester has set out plans to build 165,000 homes over the next 16 years as it continues its five-year-long attempt to get an agreed plan in place for the whole conurbation.

The Greater Manchester Combined Authority said on Monday it was pushing ahead with a new version of its controversial spatial framework, despite one Manchester council withdrawing from the process late last year.

The authority has published a draft version of what it is now calling the Places for Everyone plan for the nine local authorities in Greater Manchester, barring Stockport, that have remained committed to it. 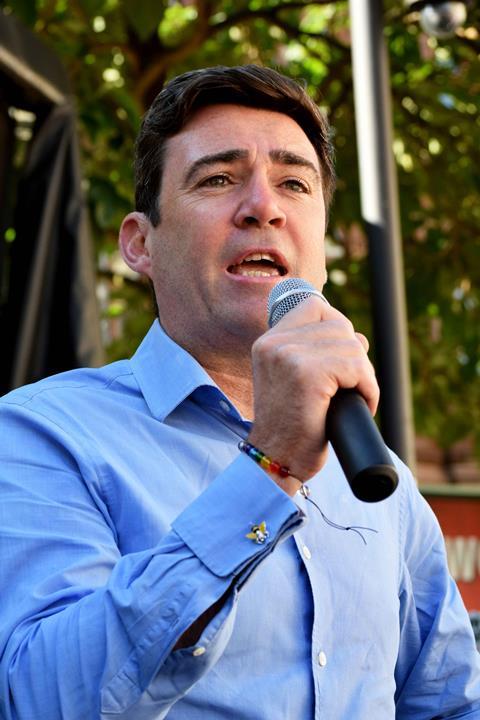 Manchester mayor Andy Burnham (pictured) said the new plan reduced the need for green belt releases in the city in order to accommodate the city’s homes, and that the plan set out a “clear and ambitious vision for new homes, enhanced green spaces and revitalised town centres”.

Stockport council withdrew from the five-year-old process to create what was previously called the Greater Manchester Spatial Framework (GMSF) in December last year, in the wake of concerns over the requirement for development on Green Belt land.

The draft plan, setting out priorities for the period 2021-2037, is to be approved by a committee meeting next week before being put out for formal consultation to the public over the summer.

Agenda documents published this week make clear the plan is largely the same as that previously consulted on for the whole of Manchester, albeit this time without covering the Stockport area. The Combined Authority is looking to take advantage of laws which allow them to push on with an existing joint plan despite the exit of one of the members, without going back to the start of the consultation process.

However, despite this, the plan includes other changes from the most recent draft of the GMSF from October last year, including a huge uplift in the number of homes planned for the City of Manchester itself, reflecting the 35% increase in the city called for in the latest version of the government’s standard method.

The combined authority said the plan reduced by 30% the amount of green belt required to be released for housing under the plan as originally proposed in 2016,

However, the proposal to build on 3.3% of Greater Manchester’s green belt contained in the nine authorities, is actually the same proportion as the most recent version of the GMSF. Because of the departure of Stockport from the plan the actual area of green belt proposed to be released is 1,755 ha, down from 1,940 ha previously.

In a statement the combined authority said the Place for Everyone plan would deliver 30,000 zero-carbon homes for social rent, a nature recovery plan, and lead to the creation of a series of mayoral development corporations. Andy Burnham said the vision “represents a major milestone as our city-region maps out its recovery from the pandemic.”

Stockport’s decision to withdraw from the plan, which was already mired in controversy over green belt releases and hugely delayed, prompted fears the joint plan would be abandoned entirely. However, if this approach is approved next week, the combined authority expects to be able to submit the plan for examination early next year, following this final stage of consultation over the summer.