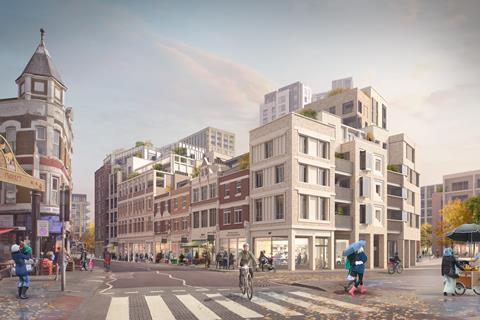 The scheme is planned for the middle of Woolwich

Plans for a £400m regeneration scheme in the middle of Woolwich by a team of architects including Glenn Howells, Panter Hudspith and Purcell have been given the green light by local planners.

Drawn up by developer St Modwen and housing association Notting Hill Genesis, the Woolwich Exchange will feature just over 800 homes along with a nursery, children’s play areas and workspaces as well as new public space.

The work will include revamping the former covered market which will be turned into a five-screen Picturehouse cinema, along with cafés, bars and restaurants.

The original proposals were to demolish the market, which is one of the oldest examples of a Lamella roof system in the UK, but it was saved by a campaign led by the Twentieth Century Society which saw it given grade II protection in 2018.

Others working on the project include HTA Design which is behind the landscaping.

St Modwen and Notting Hill Genesis were appointed by Greenwich council with construction due to begin in 2023.