Theresa May has launched a lengthy and detailed attack on the government’s plans for a new formula to determine local housing need. 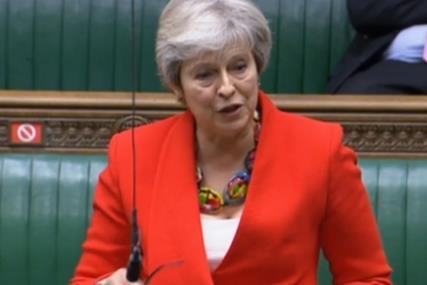 Speaking in a House of Commons debate on the issue today, the former prime minister (pictured left) said the proposal “flies in the face” of the government’s levelling up agenda and described it as “mechanistic” and “ill-conceived”.

The proposals, contained as part of a consultation published alongside the planning white paper in August, set out a new formula to determine housing need in local areas. Critics say the effect of the algorithm would be to concentrate housing in rural areas in the Midlands and south of England at the expense of northern towns and cities.

May, who was replaced as prime minister by Boris Johnson last summer, said the government was right about the need to build more homes and the need to “level up” between poorer and more affluent areas.

But she added: “The problem with these proposals, the problem with this algorithm on housing numbers, is that it doesn’t guarantee that a single extra home will be built and, far from levelling up, it forces more investment into London and the south. This is a mechanistic approach and it is ill-conceived.

“We need to make sure that the planning system sees the right number of homes being built in the right places, but we won’t do that by removing local democracy, cutting the number of affordable homes that will be built, and building over rural areas – but that is exactly what these reforms will lead to.”

May’s constituency includes the area covered by Wokingham Borough Council, which is set to see its housing target double under the new formula. Calling for the government to give parliament a formal vote on the proposals, she said: “This algorithm flies in the face of the government’s flagship policy [of levelling up].

“The government needs to think again and come back with a comprehensive proposal to this house.”

She added: “I might have thought the government would have abandoned algortihms by now.”

The new “standard method” formula consulted upon in August proposes basing local housing targets on a combination of the amount of existing homes in an area, the projected population increase, and affordability of homes against local incomes. However, an analysis of the proposals by consultant Lichfields shows that it will result in big increases in predominantly rural areas while cities such as Liverpool, Manchester and Newcastle will see big falls.

May is the latest MP to come out against the plans, following increasingly vocal opposition in recent weeks and reports that up to 70 Tory MPs are prepared to rebel against the government on the issue. West Worcestershire MP Harriett Baldwin described the plans as “Stalinist”.

May’s comments came in a debate secured by Bob Seely, the Conservative MP for the Isle of Wight, which was attended by more than 50 of the party’s MPs. Opening the debate, Seely said the planned formula would “hollow out” cities at the expense of rural areas, and said it amounted to “not levelling up, but concreting out”.

He also said the housing numbers were undeliverable in many areas and that, in his own constituency, “the government might as well be asking us to deliver a moon-landing programme. It’s setting us up for failure.”

Other senior Conservatives to speak out against the proposals included former health secretary Jeremy Hunt and former transport secretary Chris Grayling. Hunt said he had grave reservations about the plans which “undermined local democracy”. He added: “Increasingly it looks like the government is not interested in what local people think at all.”

Housing minister Christopher Pincher was due to respond to the concerns raised in the debate, which was continuing this afternoon.