The City of London has given the green light to Emrys Architects’ eight-storey office block close to the Barbican.

Three existing buildings will be demolished to make way for the scheme, which is located at 1-12 Long Lane between Barbican station and the new home of the Museum of London at Smithfield in Farringdon. 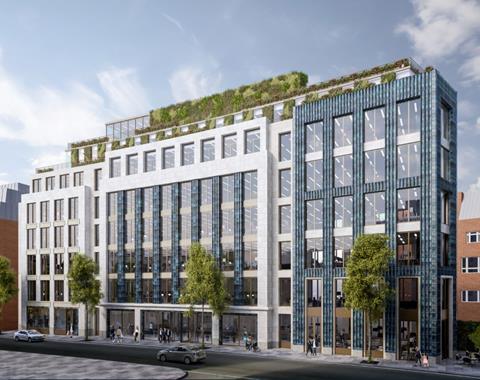 The scheme will include a series of roof gardens

The mixed-use building, which features a facade of patterned blue tiles and multiple roof gardens, will provide office space on its upper floors and retail space in its ground and basement levels.

Emrys designed the project for developers GMS Estates and Western Heritable Trust, with Montagu Evans on the project team as planning consultant.

The site, which backs on to the exposed tube lines leading to the adjacent Barbican station, is located along a stretch of the City dubbed the ‘Culture Mile’.

The district is being rebranded as a cultural centre within the Square Mile, with architects including Hawkins Brown and Studio Egret West working up plans to spruce up the area in preparation for an expected increase in footfall once the nearby Elizabeth Line station at Farringdon opens in 2022.

Emrys has chalked up a string of planning wins in recent months, including an 80,000sq ft office building near Oxford Street and a major roof extension adding 40,000sq ft of office space to a former bottling plant in Southwark.