Decision due tomorrow on whether Grenfell Inquiry will restart as planned

Announcement expected on Wednesday in the wake of new lockdown restrictions

The Grenfell Tower Inquiry is expected to reveal tomorrow whether it will resume as scheduled next Monday, in the wake of the new lockdown announced by prime minister Boris Johnson last night.

The team leading the inquiry is understood to be considering its options for restarting sessions, which were paused early on 9 December after an individual tested positive for coronavirus. They were due to restart on 11 January. 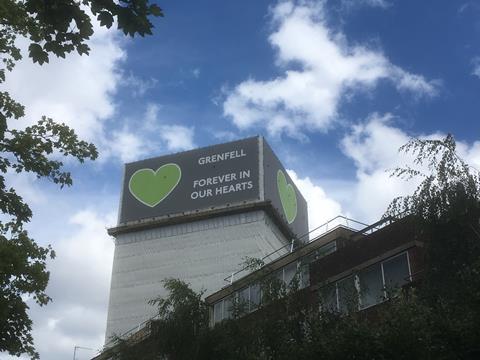 The inquiry is scheduled to continue its probing of how the actions of product manufacturers impacted on the tragic fire in 2017 which killed 72 people. At the end of last year the inquiry heard that insulation maker Kingspan gamed tests and hired lobbyists to promote its views on fire safety in the wake of the blaze.

The inquiry was suspended during the first lockdown from mid-March until early July, but it is not clear whether the team may this time consider options for running the sessions virtually.

Any decision comes amid growing pressure on three current and former employees of Arconic, the US-owned firm which manufactured the flammable ACM panels used to clad the Grenfell, to give evidence to the enquiry.

The French citizens, former executives Claude Wehrle and Peter Froehlich, and current employee Gwenaëlle Derrendinger, are using a previously little-known French “blocking” statute which they say prevents them from giving evidence at a foreign tribunal.

Building safety minister Stephen Greenhalgh yesterday called on the individuals to testify at the inquiry in a post on Twitter. He said: “Time for these @arconic executives to step up to the plate + appear before the #GrenfellTower Inquiry rather than hide behind the 1968 French blocking statute.”

Arconic has said it is co-operating with the inquiry, and that the witnesses who are resisting appearing are doing so after seeking their own legal advice.

The potential restart of the inquiry also comes as it is due to make decisions over which ministers and government officials will be called to give evidence in later phases. A letter from the inquiry secretary Mark Fisher to councillors at the Royal Borough of Kensington & Chelsea, seen by the Guardian, says: “The inquiry is currently in the process of deciding which of them should be called to give evidence in person.”

Fisher said both ministers and officials in relevant government departments had been “asked to provide statements to the inquiry relating to their involvement in the matters under investigation and have done so”.

The Guardian reported that former housing minister Gavin Barwell - chief of staff to prime minister Theresa May at the time - and the former communities secretary Eric Pickles, both now Conservative peers, would be among those questioned. Local Labour politicians are demanding May also be called to give evidence. Her handling of the immediate aftermath of the fire was criticised.

The inquiry has two modules which could require the involvement of ministers and central government officials, with one covering the handling of the aftermath, and another on the setting of regulations.