Private housing the only sector to hold firm, according to latest RIBA Future Trends survey

Autumn’s recovery in architects’ workload expectations has come to a definitive end as the resurgence of covid-19 and the second national lockdown take their toll on the sector, the latest RIBA Future Trends survey has found.

Workload expectations dropped from an index figure of +9 in October to zero in November, the lowest since June and the first fall seen since April at the height of the pandemic when the figure nosedived to -82.

The findings are a stark contrast to October’s survey, which was unexpectedly optimistic as the sector fought to get back on its feet after lockdown restrictions were eased over the summer and construction output staged a dramatic 41.7% rebound in the third quarter of the year.

The latest data reveals that as many practices in November expected workloads to increase as those who expected it to decrease, with the darkening mood coinciding with last month’s second national lockdown and spiralling covid-19 death rate.

Workload expectations slumped in most sectors, with a nascent recovery in the commercial sector going into reverse with a seven-point fall from -12 in October to -19 in November, while the community sector dropped two points to -13 and the public sector slipped back by one point to -7.

Only the private housing sector held firm with a balance figure of +12, the same posted in October. 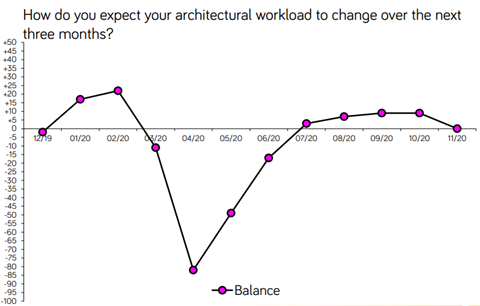 Workload expectations slipped back to a balance of zero in November

But the findings also revealed a widening gap between larger and smaller firms, with workload confidence strengthening among large and medium-sized practices to +25 while smaller practices returned the first negative predictions since June with a balance of -5.

Workload expectations in London, which have been in negative territory since March, slid back further to -7 last month from -1 in October. The trend was seen across the country with the Midlands and East Anglia dropping 15 points to -22 and Wales and the West, still the most positive region overall, slipping from +25 to +15.

The South of England remained positive with a balance of +9, although this is down from +16 last month when the number had risen by 14 points from -2 in September.

And concerns about future practice viability are building, with the share of practices expecting falling profits to threaten their viability up 3% in November to 9%, and as high as 15% in London.

Meanwhile, the staffing index is treading water for now with a return of +1 for November, the same as October, although the steady recovery seen from August has paused.

Despite four out of five practices expecting permanent staffing levels to remain consistent, the same figure posted in October, anticipated demand for temporary staff is flagging with a return of -1 in November compared to +4 in the previous month.

Overall staffing figures have fallen back to 95% of what they were 12 months ago, down from 97% in October, although the Midlands and East Anglia was the only region which anticipated the number of permanent staff to fall.

Despite the announcement of an authorised vaccine at the beginning of December raising hopes of a route out of the pandemic, RIBA head of economic research and analysis Adrian Malleson said RIBA expects the end of the Brexit transition period in January to be “highly damaging”.

He said: “Our November Future Trends survey results come after another month of fast-paced change in the UK – first a second lockdown and then the confirmation of effective vaccines, giving hopes that an endgame to the pandemic might unfold.

“However, as we move through December and into January, the RIBA anticipates that Brexit will have a long-term material and potentially highly damaging effect on the architects’ market, particularly if no deal is reached.”

Talks between the UK and the EU ground to a halt last week after the EU issued fresh demands on fishing rights and the level playing field. Despite European Commission chief Ursula von der Leyen hailing “substantial progress” in renewed efforts to strike a deal yesterday, prime minister Boris Johnson warned that a no deal scenario was still “very likely” with two weeks left to go until the December 31 deadline.