A building control body has denied that it took a “benevolent” attitude towards a combustible cladding product used on Grenfell Tower because it was facing financial difficulties.

Monday’s hearing of the Grenfell Inquiry was shown emails from Ewing in 2014 in which he told colleagues that Kingspan was seeking certificates for 30 of its products. 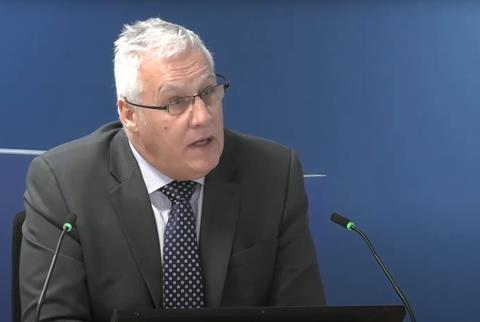 Asked why his colleagues had responded in this way, Ewing denied that the body was in financial trouble but said it was “never making any money” from a “registered details” scheme for product certificates.

The purpose of the scheme was to offer in-depth evaluation by LABC teams of certified products with the information necessary to consider them against building regulations.

Ewing said it was helpful for manufacturers because it provided them with a “consistency of approach” by local authorities in their assessments of products’ compliance.

Inquiry counsel Kate Grange QC asked if the reason he was so “benevolent” towards Kingspan was that the LABC needed the work and the firm’s endorsement of the scheme as the market leader.

Ewing admitted that there was “certainly a bit of kudos” to having Kingspan on the scheme but said there was “very little in terms of any profits that were being made out of doing the whole venture”.

The inquiry has already heard how the LABC’s certificates for K15 wrongly claimed the product could be considered a material of “limited combustibility” and suggested that it was fit for use in a wide range of cladding systems, rather than the single system covered by its fire test.

Witnesses from the firm have admitted that the certificates, which were used by Kingspan as a key element in its marketing material, were inaccurate.

K15, which attained a dominant position in the insulation market in the years leading up to the 2017 Grenfell fire, was never specified for the tower’s refurbishment but was found to be included in its cladding system following the disaster which claimed 72 lives.

Last week the inquiry heard how the LABC had sought a lucrative sponsorship deal with Kingspan, in which the insulation manufacturer was offered “direct outreach” to customers “through referrals”.

The LABC’s former director of technical policy Barry Turner had said that the body needed income as it was not being provided by either the government or from local authorities.

Yesterday, Ewing denied that Brennan’s comments suggested the work offered by Kingspan was “pretty significant” for the company and said the email was “a bit of humour”.

By the time of the email, the National House Building Council (NHBC), another building control body, had flagged concerns about K15’s certificate to the LABC.

The inquiry heard last week that NHBC risk teams had been “jumping up and down” because several large sites were “all using the material outside of the tested specification”.

The LABC was also told that fire tests of K15 had shown it continuing to burn for 20 minutes after the laboratory flame was stopped.

Grange asked Ewing: “One of the things that’s puzzling is that at the very moment when you’ve been made aware of some pretty serious concerns about Kingspan’s statements over its K15 product, as opposed to having serious conversations with Kingspan about those problems, you appear to be having mainly conversations about extra work for Kingspan, at that very moment.

“That’s puzzling, do you accept, looking at it now?”

Ewing replied: “In terms of the emails that you’ve shown me, I accept what you’re saying, but from my perspective, that was never the case.

“I suppose we could argue that Kingspan [were] sweetening us up by offering us the additional work.

“And that might well have been the case, to try and take some pressure off the fire testing side of it. But, I suppose naively, I didn’t see that.”

>> Also read: Concealment of cladding dangers ‘one of the major scandals of our time’, Grenfell Inquiry hears

Grange then asked Ewing if he thought he had been “played” by Kingspan, to which he replied: “I think we were. We were played all the way along, both Kingspan and Celotex.”

Celotex is another product manufacturer which supplied insulation used on Grenfell tower. Last year, the inquiry heard how the firm “took advantage” of Ewing’s apparent confusion over the ‘Class 0’ fire rating to obtain an LABC certificate clearing its product for use on high-rise buildings.

This week is the inquiry’s last week of hearings before it resumes on January 24. The NHBC will be giving evidence today, Wednesday and Thursday.