The architects working on one of the first schemes in the government’s 40-hospital rebuilding programme have been asked to rework designs to incorporate more ”modern methods” (MMC) in its construction.

The Princess Alexandra in Harlow, Essex, is one of six hospitals that was awarded a share of £2.7bn in November 2019 as part of the decade-long initiative. 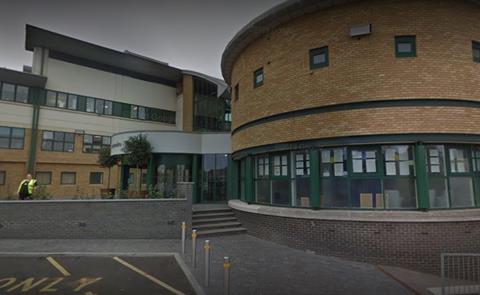 How the current hospital looks in Harlow town centre

Chorley-based practice Gilling Dod Architects is the main architect on the project, with Danish practice CF Moller drafted in last year to work with the original team and “act as a second eye and critical friend”.

The hospital said the designs are being overhauled to ensure as much MMC is used as possible.

The new hospital is set to be built on a greenfield site near junction 7a of the new M11, about three miles east of its existing home in the centre of Harlow. It will dovetail with plans for thousands of new homes in the area as part of the Harlow Gilston Garden Town project.

At its most recent meeting last month, the board of the Princess Alexandra Hospital NHS Trust said: “The architects have been working with technical advisors to redesign the building to ensure that we maximise the benefits of MMC.”

Bryden Wood is the technical advisor on the project.

The board papers also revealed the trust had been working closely with local planners to ”ensure it meets the stringent design requirements” of the planned garden town development.

”We are confident that this design will not only reduce construction time but will reduce cost of delivery and support the national programme’s drive for repeatability across the wider HIP [health infrastructure plan] programme,” the papers said.

Repeatability and MMC, along with net zero, are the government’s touchstones for the 40 hospitals, which it has confirmed it will build as a single programme.

The trust said the changes meant the design will not now be completed until the end of May.