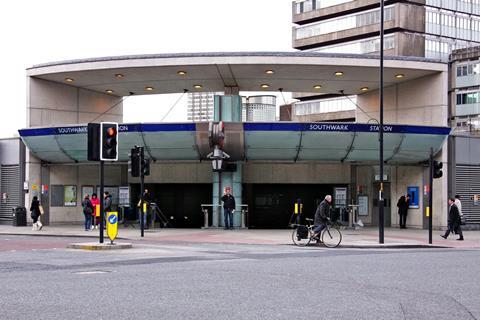 Historic England has rejected a listing application for Richard MacCormac’s Southwark Tube station, paving the way for its demolition.

TfL is understood to be preparing a planning application to be submitted this autumn for a high-rise proposal by AHMM which would destroy MJP’s circular ticket hall.

MacCormac referenced Holden, Schinkel, Aalto – and his great hero Soane whose toplit domes provided the inspiration for the oculus over the ticket hall.

This is set to be replaced by a tower containing 300 flats.

An indicative image in a report to TfL’s programmes and investment committee last month showed a stepped block rising to approximately 30 storeys and extending beyond the immediate footprint of the ticket hall. The proposal would improve wheelchair access and capacity at the busy station. 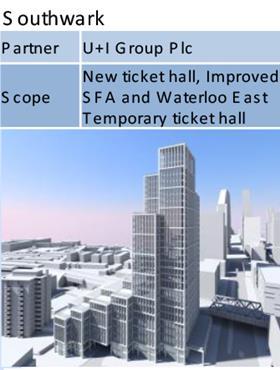 An illustration of what could be built above MJP’s Southwark Tube station, contained in a TfL report

MacCormac always intended the station to be built over, but planning approvals for a nine-storey and a later 11-storey development were never built and have since expired.

The heftier proposal TfL is working on with developer U+I would be too heavy for the existing structure.

Tess Pinto, conservation adviser at the Twentieth Century Society, which submitted the building for listing, said they were disappointed by Historic England’s decision not to protect the station.

“Our application was prompted by plans that will involve at a minimum the demolition of the Holden-inspired ticket hall,” she said.

“Without the protection of listing there will not be sufficient leverage to save it.

“When the JLE [Jubilee Line extension] was built 20 years ago, it was described as some of the finest public sector architecture in Britain of recent years. There has been little achieved since that has surpassed it.

“In our opinion Southwark easily meets the high bar for listing that is applied to buildings which are younger than 30 years old. We firmly believe that Historic England have made the wrong decision here.”

But Historic England said the threatened ticket hall was not of sufficiently high quality to warrant listing at grade II* or above – the only categories available to a building dating from 1999.

“The station exhibits architecture of good quality and is of some architectural interest, but does not meet the criteria for a building under 30 years old, since no parts of the station are of outstanding quality and under threat,” it concluded in its assessment (see attached pdf). 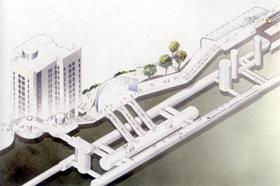 The JLE, the UK’s most significant infrastructure project of the later 20th century, was hailed by the Royal Fine Arts Commission (Cabe’s predecessor) in 1992 as: “An example of patronage at its best and most enlightened.”

Every station was designed by a different architect: Foster & Partner at Canary Wharf, Hopkins at Westminster, Alsop and Störmer at North Greenwich, Wilkinson Eyre at Stratford, Ian Ritchie at Bermondsey and Van Heyningen and Haward at West Ham.

In 2005 former BD and Guardian regular Jonathan Glancey wrote a piece headlined: “Why can’t all Britain’s new public buildings be as bold and beautiful as Southwark tube?”

Relatively small, Southwark may not have the lofty grandeur of Canary Wharf station, or Westminster, essentially the undercroft to Portcullis House, but it is equally impressive, notably for the exceptional intermediate concourse. The design of the station as a whole pays homage to neoclassicism, particularly to Soane, in the unfolding journey through the building, in the dramatic simplicity of forms and relationship of spaces and materials, and, as mediated through Holden, in the treatment of the ticket hall rotunda and the lower concourse, while the curved screen wall references Aalto’s screen at the New York World’s Fair of 1939. The revealing views, and clever use of natural light and supplementary lighting lead the passenger through the building with minimal intrusive signage, contributing to its acknowledged success as a building space.

It is unique as it has a richness of ideas and relatively small-scale details not repeated on the Jubilee Extension Line. It stands out for the quality of its finishes and, with Westminster and Canary Wharf, was seen through to completion by its architects rather than by the Jubilee Line’s team, resulting in a finer finish.

Once the position of the stairs and lift shafts had been agreed, it was built to the approved plan and is essentially unaltered. In MacCormac’s scheme for the overbuilding the glazed rotunda above the ticket hall was to remain, providing unimpeded light from above. 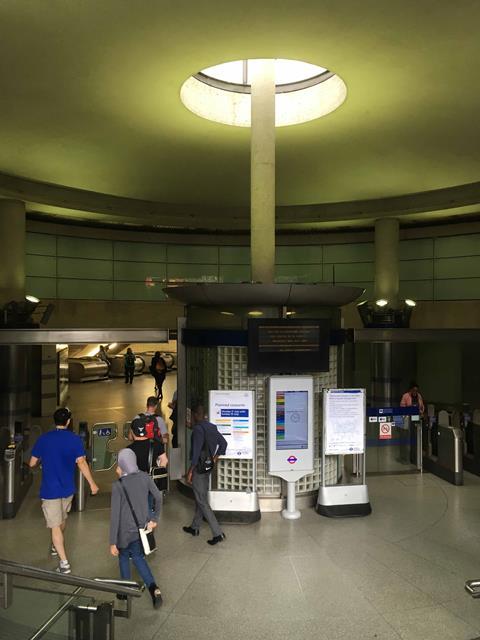 All JLE stations may be worthy of listing once they pass the thirty year threshold, some at high grade. Richard MacCormac is highly regarded as an architect and theoretician, and Southwark, as the practice’s first public commission, marked a transition from their previous university work, leading to the Wellcome Wing at the Science Museum and extension to Broadcasting House. Southwark’s excellence is reflected in critical responses in the architectural and transport press, and in the range of technical and design awards it received

Notwithstanding its acknowledged significance, we have carefully considered the degree of special interest within the building, relative to the threat. For buildings of such recent date, the bar for listing is exceptionally high.

The station does not have a prominent external presence; it was designed as an underground station with the flexibility to support overstation development, and although MacCormac provided a scheme in 1997, none has been built. Historically, urban - as opposed to suburban - underground stations have been listed for their historic, architectural and engineering interest, present in the entrances, ticket halls and escalators, and the lack of the superstructure and temporary external appearance of the rotunda would not impede listing in this case if the internal spaces were deemed to meet the consistently high level of special interest combined with a level of threat demanded of the listing criteria for a building of such recent date.

We note that each section of the station from entrances to platform level is connected and contributes to the episodic journey through it. We are mindful that it was always intended to build above the rotunda, and that the un-executed schemes have suggested different interpretations of the entrance to the station whereas conversely, the natural light provided by the eyelid above the intermediate concourse contributes to the exceptional success of this space. As part of the dramatic journey, some areas will have greater prominence.

The intermediate concourse and relationship with the lower concourse may have a high level of special interest, but along with the Waterloo East interchange are not under threat and cannot be recommended for listing at this time. Whilst they are part of the episodic journey through the station, the entrance hub and rotunda on Blackfriars Road are not of the same very high calibre architecturally, aesthetically or functionally as the intermediate concourse and its approach from below, and do not merit listing at Grade II*.

After examining all the records and other relevant information and having carefully considered the architectural and historic interest of this case, the criteria for listing buildings of less than thirty years old are not met and Southwark Underground Station, 1994-1999, is not recommended for listing at this time.

Southwark Underground Station, 1994-1999 by civil engineers Babtie DHV, architects MacCormac Jamieson Pritchard architects, with YRM/Anthony Hunt Associates and Alexander Beleschenko, under Roland Paoletti as architect-in-charge of the Jubilee Line Extension (JLE), is not recommended for listing at this time for the following principal reasons:

Architectural and engineering interest: the very high level of engineering and architectural interest expected of a building of such recent date, and the acknowledged exceptional integration of art within transport infrastructure, do not extend to the ticket hall.