Liverpool City Council is poised to commission a planning framework to drive the delivery of new grade A offices against a backdrop of increasing residential development.

The authority’s cabinet is being warned that the city’s central business district has run out of top-grade office space and suggests that the masterplan would allow planning officers to better shape the city’s growth.

A report to Friday’s meeting says the delivery of one- and two-bedroomed apartments – both as brownfield developments and permitted-development conversions – has come at the expense of the provision of new commercial space, and calls for financial backing for the proposed Spatial Regeneration Framework.

The council also suggests that a new pipeline of office stock for the 16ha central business district could “potentially connect” to the Princes Dock element of the controversial £5.5bn Liverpool Waters development to its east. Earlier this month developer Peel Holdings released new masterplan images for part of the project following warnings from Unesco about the future of the city’s World Heritage Site status. 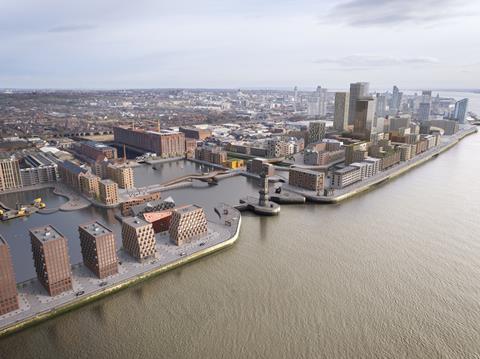 Liverpool mayor Joe Anderson said the central business district was a “major engine” in the city’s economy and needed to have its future growth proactively managed to maximise its potential and further underpin the development of Liverpool Waters.

“The supply of grade A office space is critical to any successful city centre which is why we are supporting the Pall Mall development but to stimulate demand and provide more supply, which will in turn create much-needed jobs in the professional sector, we need a long-term vision which this spatial regeneration framework will underpin,” he said.

“The fact is the city centre has boomed in the past decade in its appeal for shoppers, tourists and those wanting to live in a great city centre and the competing needs of a growing population and visitor economy now needs to be addressed to ensure the district remains a dynamic and vital cog in our commercial economy for the next 20 years.”

Earlier this year, the city council confirmed Kier Property and developer CTP as its joint venture partners to redevelop the 1.6ha Pall Mall car park site next to the Exchange Station.

The masterplan for the scheme would deliver 37,000sq m of new office space along with new leisure and retail space. Allies & Morrison was appointed as project architect on the scheme last year.