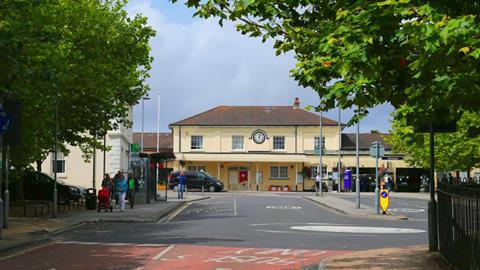 Lifschutz Davidson Sandilands has won a design competition to draw up regeneration proposals for two development sites near Winchester station.

According to the competition brief, LDS will be tasked with creating plans for around 13,000 sq m of new office space, up to 8,180 sq m of residential accommodation and around 465 sq m of retail space at the sites – known as “Carfax” and “Cattlemarket”.

A statement from contest organiser RIBA Competitions said LDS was chosen for its “excellent team, compelling vision and clear understanding regarding the needs for this project and the wider Winchester issues”.

Council leader Caroline Horrill said developing the Station Approach area would help deal with the city’s shortage of grade-A office space and improve first impressions of the city for those arriving by train.

“The appointment of Lifschutz Davidson Sandilands is our first step in regenerating the area so it is appealing to residents, businesses and visitors alike,” she said.

“The next step is to develop concept designs – as with all our major projects, consultation with residents and other stakeholders is absolutely key and ensuring this is done satisfactorily has played a critical role in the RIBA selection process.”

“Lifschutz Davidson Sandilands demonstrated their public engagement skills and clear understanding of the need to engage residents and bring their views into the designs and the project,” he said.

“The team scored very highly across the board.”

The statement announcing LDS’ selection stressed that the competition had been “an EU-compliant procurement process”.

In 2015, Winchester saw its plans to redevelop a different site in the city centre thrown into disarray after a High Court judge said the authority had broken the law by not holding a new competition to find a developer when changes were made to the Allies & Morrison-designed scheme.

Judge Dame Beverley Lang blasted the authority for committing a serious breach of the procurement rules when it appointed Henderson to develop the 3ha Silver Hill site on renegotiated terms, including dropping affordable housing and increasing the number of shops.