Architect was appointed after £165m Allies & Morrison scheme was pulled 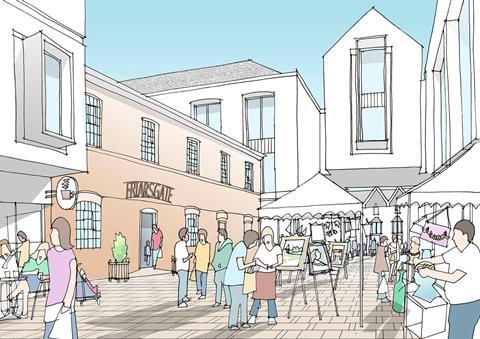 JTP’s plans for the centre of Winchester have been approved by the city council’s cabinet.

The draft supplementary planning document (SPD) has now gone out for public consultation.

The architect and masterplanner was appointed in January after a big kerfuffle over previous £165m plans for a smaller 2.3ha area known as Silver Hill. Local architects joined a public demonstration against the proposals.

Designed by Allies & Morrison for TIAA Henderson Real Estate, these foundered in 2015 after a High Court judge found the city council had committed a serious breach of procurement rules when it appointed Henderson to develop the council-owned site on terms renegotiated from an earlier agreement.

JTP beat 16 rival bids to pick up the renewed job, in conjunction with a design team that includes Hampshire-based Snug Architects, UBU Design and Atkins. 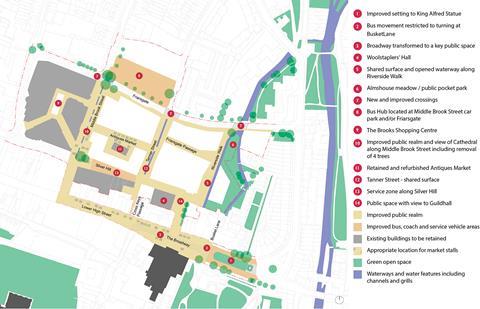 This focuses on a 4.5ha patch of the historic centre and the SPD sets out the vision, detailed objectives and a planning and urban design framework for its regeneration.

JTP managing partner Marcus Adams said: “The site is extremely significant in activating the wider regeneration of Winchester. Its rich heritage has played an important part in informing the framework.

“The resulting SPD will be definitive enough to guide the spirit and aspirations of Winchester to help shape the regeneration, but flexible enough to evolve and encourage creativity.”

The mixed-use quarter will include retail, commercial, cultural, housing and community uses, to complement the city centre and serve the whole community. The buildings, streets and places will be designed and laid out with a Winchester character and scale – described as “Winchesterness”, he said. 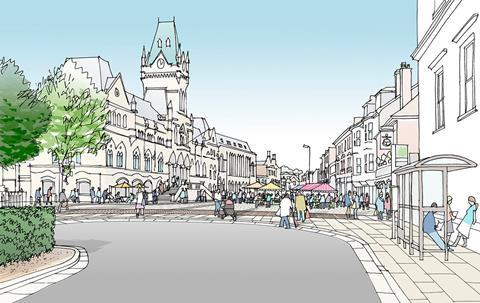 The proposals also include the opening up of the brook to the east of the site and a new bus hub, with buses routed away from The Broadway and High Street to allow for environmental improvements and to accommodate markets and other activities.

A final SPD will be approved in spring/summer 2018 by Winchester council’s cabinet.