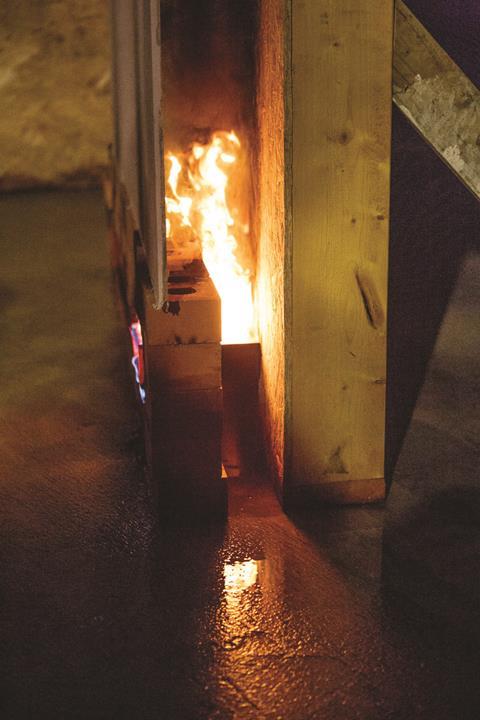 The Association of British Insurers (ABI) has described the full-scale tests used to demonstrate that cladding systems meet fire regulations as “utterly inadequate” and is calling for them to be revised.

It commissioned a series of experiments by the Fire Protection Association (FPA) to show that the full-scale mock-ups used for the tests do not represent real world conditions. This means the performance of cladding systems could be compromised in a fire, especially where combustible materials are involved.

The ABI is calling for all combustible materials used in external cladding systems to be banned.

The RIBA also wants combustible materials in cladding systems to be bannned on buildings over 18m high. It recently wrote to the communities secretary, Sajid Javid to reiterate the need to take its recommendations seriously.

The insurers’ body said that if the insurance industry felt that not enough was being done to address its concerns the availability and cost of insurance cover “could change”.

ABI director-general Huw Evans said: “It is a matter of urgency that we create the right testing regime that properly replicates real world conditions and keeps pace with building innovation and modern design.”

And Fire Protection Association managing director Jonathan O’Neill said the British Standards Institute (BSI) needs to go back to the drawing board: “The current cladding test standard requires urgent review to ensure that systems that pass are reflective of the systems that are installed and of the risks to which they are exposed.

“We urge BSI to urgently reconvene the group responsible for this standard to consider the results of this research and make changes to the standard as required.”

Concerns centre on the BS 8414 fire test, used to show a mock-up of a cladding system can meet the fire performance requirements of Part B of the Building Regulations for buildings over 18m tall.

The government commissioned tests to BS 8414 after the Grenfell Tower fire to establish the type of aluminium composite material cladding used on the tower would not meet building regulations. Cladding systems featuring combustible insulation passed the tests where these featured non-flammable external panels.

BS 8414 tests use sealed-edge panels but those on real buildings include gaps and cover greater areas. The FPA tests showed mock-ups with ventilation gaps burned much more rapidly – and that fires spread more quickly inside cladding systems that include penetrations for pipes and vents, which BS 8414 does not use.

Laura Hughes, senior policy adviser for property insurance at the ABI said, “It’s important this evidence is taken into account as part of the urgent work being done to reform building standards, and any necessary changes to important testing procedures must then be implemented without delay.”

The BSI said it would share the findings with its standards committee and if this felt the evidence supported changes to BS8414 it would amend the standard which could take up to 18 months.