20-storey building will contain flats, offices and a church 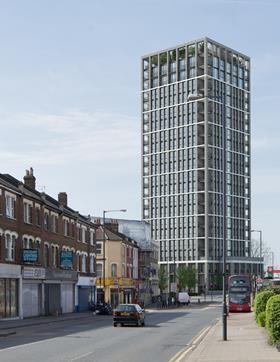 Plans by architect Stiff & Trevillion for a 20-storey tower as part of the Old Oak regeneration scheme in west London have been given the green light.

The £50m job (pictured) is being developed by Fruition Properties at 2 Scrubs Lane, the same road where Make and Allies and Morrison are also carrying out further housing schemes.

The tower, which will be built on the site of the Pentecostal City Mission Church, will include 85 homes which will be a mixture of one-, two- and three-bed apartments.

Work is due to start early next year and finish in 2021.