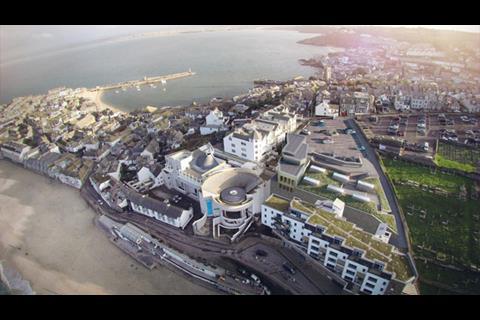 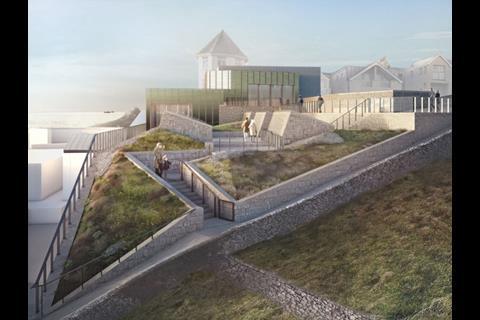 Rooftop visualisation showing the Tate St Ives extension by Jamie Fobert. The faience tile-clad pavilion containing services is at the back. The granite-clad gallery rooflights are in the middle ground. The gardens and beach footpath in the foreground form the roof of the new galleries. 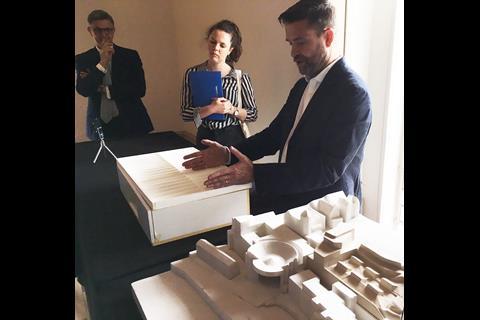 Jamie Fobert explains his Tate St Ives project at a press conference this week, watched by the gallery's executive director Mark Osterfield. In the model to his left the extension is coloured a slightly darker beige than the existing buildings. The new flats are the white piece between the extension and the drum of the original gallery 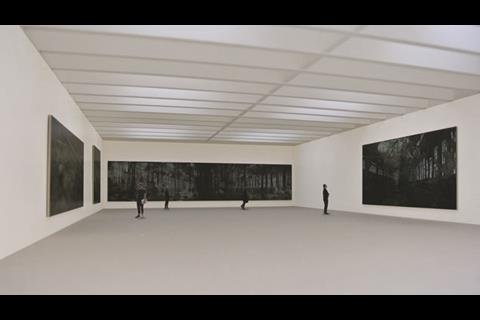 Model of the new gallery designed by Jamie Fobert Architects for Tate St Ives. The room can be configured in multiple ways 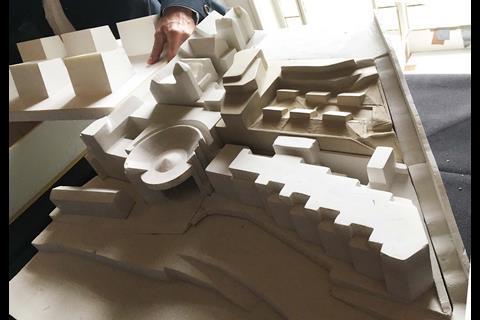 Jamie Fobert explaining two Tate St Ives models at this week's press conference. In his hands, the roof of the gallery space showing the 3.5m deep rooflights which will protrude into the cliff gardens. On the right a model showing the extension (slightly darker in colour) in context with the original drum-shaped building and the new sheltered flats (front right)

Scheme in Cornwall will welcome first visitors this October

Jamie Fobert has described how excavating a Cornish cliffside to double the size of Tate St Ives triggered unexpected delays to the £20 million project.

Hitting layers of a hard bedrock called blue elvan slowed the progress of the scheme which will finally open in October, it was announced yesterday.

The presence of a block of sheltered housing right next to the site – built first as part of the wider enabling scheme – meant the contractors couldn’t dynamite the rock but had to drill it out. The rock under the flats had fracture lines which made it easier to remove but it was far more solid under the site being prepared for the Tate, which was donated by the county council.

When the extension opens in the autumn it will be 12 years after Jamie Fobert Architects was first appointed by the Tate. Most of those years were consumed by planning issues but more recently problems included the blue elvan and issues with the original building which was refurbished by original architects Evans & Shalev and re-opened in March.

Fobert was first appointed in 2005 but lost the project when the site was changed in 2011. The following year he beat an all-star Ojeu shortlist to claim it back again, albeit in a new guise. The other contenders were Tony Fretton, 6a Architects, AL_A, Feilden Clegg Bradley Studios and DSDHA.

Initially there was strong local opposition to a greatly expanded Tate, but after a community consultation process it was granted planning permission by a unanimous council.

Fobert explained that the ambitious excavation of the cliff was a response to local concerns and the “unbelievably constrained” site which is hemmed in by cemeteries, housing, a car park and the sea.

Mark Osterfield, executive director of Tate St Ives, said: “We couldn’t have done it without Jamie being such an affable chap.”

Fobert said: “A lot of people feel the Tate is by far the largest building in the town and their fear when the Tate said it was going to double was that they would physically double its size and completely overpower the town.

“It was through that consultation we had the idea of sinking into the hillside and building quite a modest building above.”

This “pavilion” is clad in faience tiles while the rest of the extension is clad in granite.

The extension doubles the amount of gallery space and also adds education and conservation studios, visitor facilities and offices. A lift as large as Tate Britain’s has been installed, leading from a loading bay on the roof – which is ground level at the back of the site. This will allow large sculpture and paintings to be displayed.

Landscaped gardens cover the roof, allowing the public to walk from town down to the beach without realising they are standing on a buried gallery. Large granite-clad roof lights echo the town’s industrial past, said Fobert.

Inside they allow oblique southern light into the new columnless gallery which can be subdivided into up to six rooms, flexibility Tate St Ives has never had.

The scheme will also mean the museum can stay open year round, rather than having to close for every rehang.

The sheltered housing, whose client was a housing association, was designed by local practice Poynton Bradbury Wynter Cole.