Proposals to go on display at London’s Building Centre

Farrells has won an ideas competition organised by the Building Centre and backed by London mayor Sadiq Khan for better 24 hour cities.

The winning entry centres on making use of London’s canal system to create a new district for an improved night time economy.

The app-based idea proposes mobile boat markets operating around the clock, directing boat traders to available mooring spots and alerting Londoners to shops and services near them. 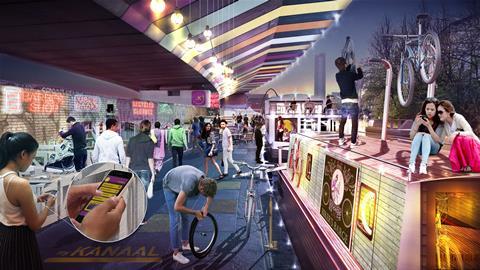 Runners-up were an eco-friendly urinal by French design firm Faltazi which funnels waste into a closed box below filled with straw and sawdust which is then turned into compost that can be used in parks and gardens and a light and music installation by Canadian firm Daily tous les jours called Musical Swings. The swings play different notes depending on the position of participants and create melodies when they are synchronised

Eight schemes were shortlisted with the winner picking up £1,000 and the two runner-up £500 each. All the designs will be on display at the Building Centre in London from June 1.