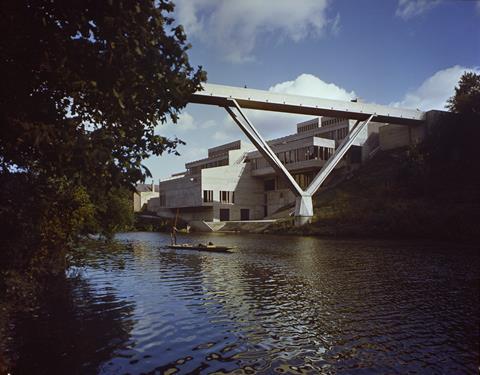 Plans for a design initiative to explore future uses for a demolition-threatened brutalist structure at Durham University have passed a key funding milestone.

The Save Dunelm House campaign, which is backed by the Twentieth Century Society, last month set itself a target of raising £7,500 to host a charrette at which teams of architects from around the country will work up ideas for the future of the 1960s building.

Dunelm House was designed by Richard Raines of the Architects’ Co-Partnership, under the supervision of Michael Powers, and built between 1964 and 1966 next to Ove Arup’s grade I-listed Kingsgate Bridge over the River Wear.

The building is currently occupied by Durham University students’ union, but the organisation is keen to move to new premises and the university has secured a certificate of immunity from listing – a COIL – that will allow it to redevelop the site.

When Save Dunelm House launched its funding campaign last month, it targeted raising £7,500 by January 10 with the aim of organising the charrette as early as possible this year and creating an exhibition to show off the results.

As of the funding deadline, the campaign had raised £8,383 from more than 200 donors, with the total including one anonymous donation of £1,000 and another of the same amount from Hawkins Brown Architects, which indicated it was keen to be involved in the charrette.

Founding partner Roger Hawkins told BD the practice strongly believed that Dunelm House should be preserved for future generations, and pointed to its work on Sheffield’s Park Hill Estate and the Elliott School in Putney, south-west London, now called the ARK Putney Academy, as examples of what was possible.

“One of our partners is a member of the C20 Society and preserving the nation’s modern built heritage is something we’re keen to work together on,” he said.

Hawkins said the practice was keen to find out what the process would be for taking part in the Dunelm House charrette and said he felt sure there would be Hawkins Brown staff who wanted to be involved.

Other supporters include architect Kate Macintosh, who described the building as a “masterpiece”, and architecture critic Hugh Pearman, who said Dunelm House was one of the nation’s “great post-war buildings” and one that must be saved and restored. 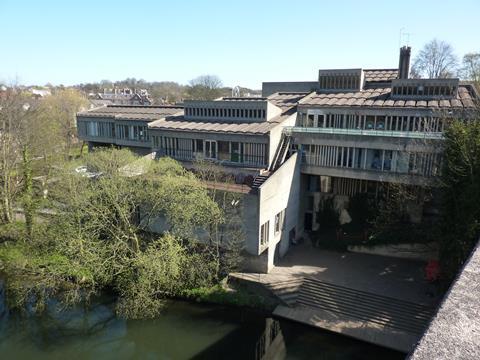 Campaign group member James Perry, of Newcastle based practice Harper Perry, said the team was delighted by the response generated by the crowdfunding drive.

“We think it demonstrates the interest and concern over the future of what is one of the most significant post-war buildings in the north-east,” he said.

“We are hopeful that Durham University will now work with us to make the design charrette a useful exercise, testing ways of reimagining and reusing the building, as opposed to demolition”.

Meanwhile, the C20 Society is actively challenging the Department for Digital, Culture, Media and Sport’s decision to issue the COIL and wants to see the building listed at grade II.

DCMS has twice determined that the building does not have special architectural interest. Its most recent rejection of the C20 Society’s case accepts Dunelm House was “a thoughtful solution” for its site when it was created, but says the building lacks “stylistic and structural variation” and that sections of the building suffer from substandard construction.

C20 Society senior conservation officer Clare Price last month insisted that Dunelm House had no underlying issues that could not be rectified in the interests of preserving the building for future generations.