dRMM ‘capable of anything’ after Stirling win 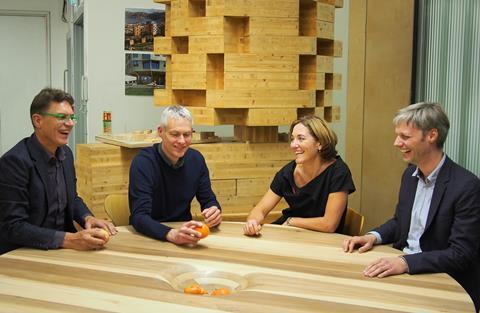 dRMM is “capable of anything” after its Stirling victory and has infrastructure and overseas cultural projects in its sights, said co-founder Alex de Rijke.

The practice is hungry to take on schemes that would “test our creativity to the hilt”. This could include new sectors or cultures, but also more strategic projects.

Winning the Stirling Prize, for Hastings Pier, has given them confidence to tackle complex structural problems, the directors said in an interview with BD. And they’re hiring.

“We are capable of anything,” said de Rijke. “We have been for a while. Now it’s been recognised. We have the authority, the talent, the firepower – we are big enough to do anything.”

Infrastructure or strategic level work, as well as an overseas cultural project like a museum or gallery would all be tempting, he said.

The phone has not been ringing off the hook with commissions since the Stirling win, they admitted, but they were overwhelmed by a deluge of congratulatory calls and emails.

“You can see that people are suddenly aware of us. We’re in conversation with a few people but there’s no landmark scheme that’s just landed. I think that might not happen and that’s fine. For us it’s more the long-term impact on the type of projects and the practice which is important.”

Marsh described the Stirling win as “an endorsement of the 22 years we have been in pursuit of design excellence”.

He said the diversity of dRMM’s work was the practice’s strength and they wanted to continue that, ideally taking on schemes involving multiple sectors.

“A project that contained many different threads would be fantastic to test our design abilities,” he said. “If you come to a new sector afresh you can quite easily challenge the conventions. People get too comfortable. You need people to come and shake things up.”

Lencer added: “We are getting more and more involved in strategic masterplanning and the bigger picture, trying to bring different stakeholders together and different functions and how to orchestrate them on a larger, strategic level. That’s what the practice could really contribute to: how do we develop our cities and move forward in the next century? We have so many challenges we need to look at.”

The practice, which currently has around a dozen projects at all scales on its books, wins most of its work through competitions, said de Rijke. Increasingly, those are invited rather than open competitions.

“You inexorably become part of the establishment you wish to challenge,” he said.