Target Zero guidance on achieving low-carbon buildings has been launched by the BCSA and Tata Steel. Here are three steel-framed projects featured in the research.

Target Zero is a £1 million research programme set up to provide free guidance on the design and construction of sustainable, low- and zero-carbon buildings in the UK.

It is funded by Tata Steel and the British Constructional Steelwork Association (BCSA) and has been carried out by a consortium of sustainable construction organisations including Aecom and Cyril Sweett.

In each case, the designs are modified to a base level compliant with 2006 Part L before introducing the latest Building Regulation changes.

The research focuses on how Very Good, Excellent and Outstanding Breeam ratings can be achieved and at what cost; quantification of the embodied carbon in buildings with different structural forms; and how operational carbon can be reduced by incorporating energy-efficiency measures and low- and zero-carbon technologies.

The first three guidance reports – Schools, Warehouses and Supermarkets – can be downloaded now from the Target Zero website with the final two – Offices and Mixed-Use – to follow soon. www.targetzero.info 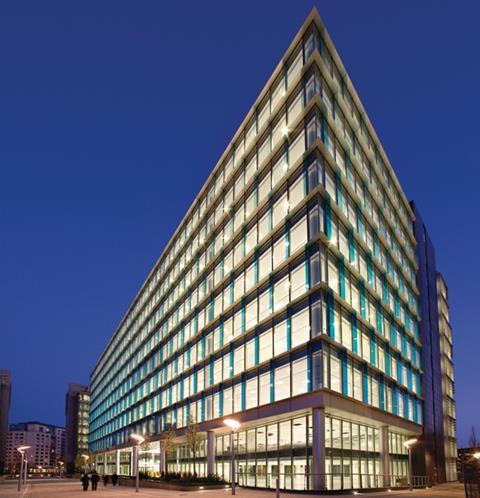 Rated Breeam Excellent, Sheppard Robson’s One Kingdom Street offices for Development Securities was one of the first UK office schemes to incorporate carbon footprinting of the construction process throughout the supply chain.

Completed in 2008, the 24,000sq m building provides typical floor plates of 2,500sq m with floor-to-ceiling glazing on all facades. Accommodation is arranged over 10 storeys and around two central atriums. It has a 12m x 10.5m steel grid comprising fabricated cellular steel beams supporting a lightweight concrete slab on a profiled steel deck. The £65 million building sits on a podium over the route for Crossrail and steel was the only structure able to span the gaps between the beams in the substructure. 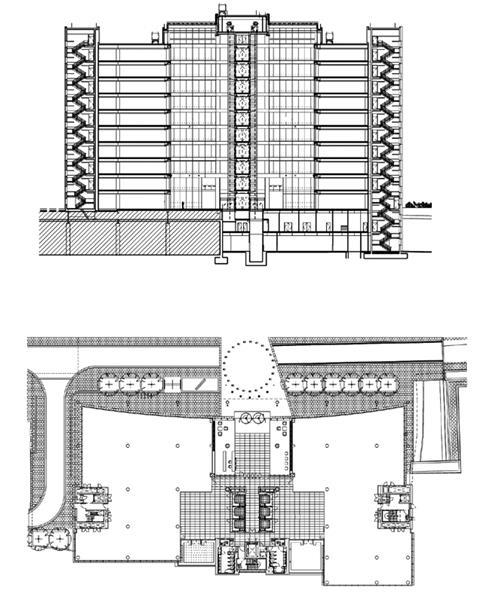 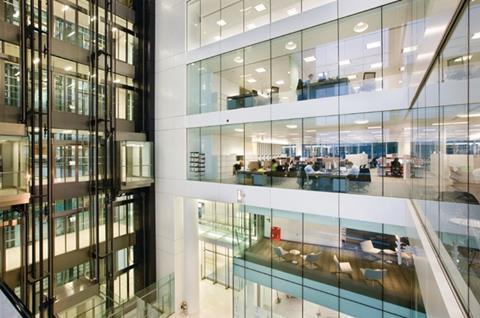 “The design originally had a large atrium on the north but we changed it to the south because it offered a better buffer to solar gain,” says Sheppard Robson partner Mark Kowal.

The main vertical escape and service cores are at the east and west ends to minimise sun penetration. On the south side, the main circulation core and atrium act as a buffer between the external environment and occupied floors. Offices that do engage with the south facade are protected by external horizontal deep louvres.

The building achieved its Breeam Excellent rating with the help of geothermal piles to provide ground source cooling and the use of renewable energies such as solar roof panels. An active chilled beam air-conditioning system was considered but at the time this wasn’t widely accepted by clients and investors and so was not used. However, perceptions of this technology are now changing.

“The ethos of One Kingdom Street is about trying to reduce carbon in the whole delivery process. It’s not just about sticking in clever gizmos,” says Neil Burns, director of operations in Europe at Aecom. “It has done well to optimise the balance between lighting levels and energy consumption.”

Kowal has noticed an increase in emphasis on low-carbon design since the creation of One Kingdom Street. “It’s genuinely being driven right through the design process, even by the clients,” he says.

Burns adds that it is important the quality of the environment isn’t neglected. “It’s no use having a low-carbon solution that no one wants to occupy,” he says.

A package of the most cost effective energy efficiency measures costs 0.3% and yields a 42% saving in regulated emissions, which well exceeds 2010 Part L requirements. To achieve Breeam Outstanding would require 9.8% more capital cost compared with 0.2% and 0.8% respectively for Very Good and Excellent.

Lighting accounted for 27% of carbon emissions. The impact of the structure on operational emissions was small – varying 0.5%between post-tensioned concrete and a steel frame composite. 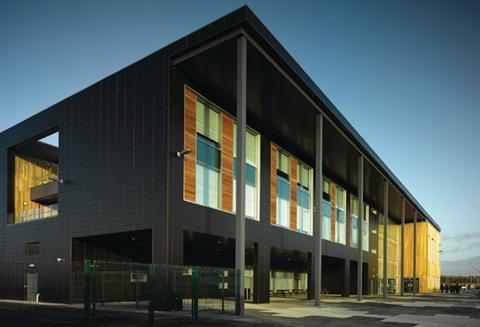 Aedas developed a “Swiss cheese” concept for this BSF school, by carving ventilation holes in the structure.

Balancing educational needs with environmental performance was a key challenge for architect Aedas in its design for Christ the King Centre, one of seven BSF schools designed by the firm in Knowsley.

Completed in 2008, the 9,637sq m building accommodates 900 students, although it is now threatened with closure owing to falling pupil numbers. It is based on a 9m x 9m structural grid and has a Breeam Very Good rating.

One of the biggest issues was the client’s stipulation for 80sq m classrooms grouped around a centralised learning zone for each key stage. This led to a deep plan for the three-storey building, with Key Stage 3 accommodated on the top floor, Key Stage 4 on the middle, and specialist-teaching accommodation on the ground floor.

Unfortunately, says Aedas associate director Rob Hopkins, environment and educational priorities were “almost at opposite ends of the spectrum”.

“As soon as you have a school where classes are deeper than 7.5m, being able to use natural ventilation and daylight becomes challenging,” he says. “So we developed a ’Swiss cheese’ concept where we carved holes into the building that swept down so you could naturally ventilate.” He adds that M&E engineers in the end went for mechanical ventilation after it was decided to use a steel frame rather than post-tensioned concrete.

Very low sill levels in classrooms made the most of the daylight. “Wherever you were, you had a nice view,” says Hopkins.
Where the school did score well in carbon reduction was the use of ground source heat pumps and heat-recovery technologies installed by Balfour Beatty across all the Knowsley BSF schools. “That really helped us to reduce the carbon footprint,” he says.

In the years since the Knowsley BSF, low-carbon has become a higher priority in Aedas’s school designs, which now gain Excellent or Outstanding Breeam ratings.

“Knowledge is improving very quickly,” says Hopkins. “In 2007, [low-carbon] conversations rarely took place unless it was a specifically low-carbon school design. Now, these conversations take place on every school we design.”

Hopkins welcomes new guidance on designing low-carbon buildings: “Any information that is easy to digest is vital, as is being able to look at a number of different sources for that information.” 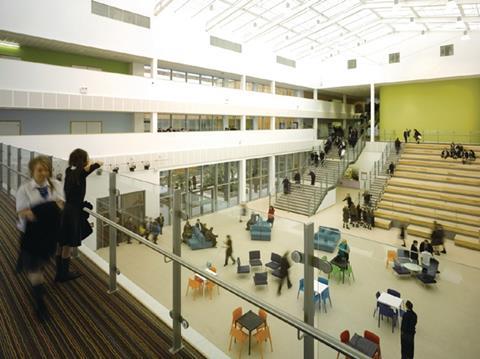 What the Target Zero report says: For a version of the school stripped back to “typical practice” (e.g. just compliant with 2006 Regs etc.), the capital cost uplift needed to achieve Breeam Very Good was 0.2% compared with 0.7% for Excellent and 5.8% for Outstanding.

Cancelling out regulated carbon emissions with on-site low carbon technologies would cost 12% more. The guidance found a significant proportion of embodied carbon was in the substructure, and that the best results were obtained using steel piles. The structure had virtually no impact on operational carbon emissions – with less than 1% variation between steel and concrete. 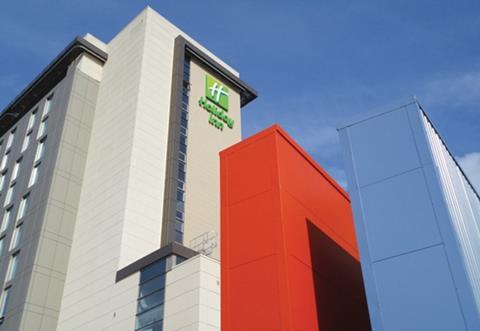 The hotel is next to the studios.

Completed in late 2010 for client Peel Holdings, the Holiday Inn building is attached to the main studio building in the Media City UK complex in Salford. Chosen as the mixed-use case study in the Target Zero guidance, this north block consists of two levels of hotel reception facilities, plus five floors of studio offices and eight floors of hotel rooms above that.

The entire building is rated Breeam Very Good, assisted by the Trigen Combined Heat & Power system that provides heating, cooling and hot water for the whole of the complex.

Architect Fairhursts had to contend with changing uses – the south tower was initially residential before changing to office use, and in the north tower, Fairhursts is looking at fitting out the office floors as hotel bedroom floors.

Building services consultant Aecom looked initially at passive methods of reducing energy needs such as beefing up the thermal performance of the building fabric and glazing systems that went into it. But Aecom concluded that utilising heat recovery and CHP systems was far more effective, especially on a site with diverse uses.

“With building regulations getting tighter anyway, extra investment in the fabric wasn’t giving the same measure of reduction as something more active,” says Graham Millard, regional director of Aecom.

“If you had a single use building, increasing its thermal fabric requirements might have been more effective. The more diverse the uses, the more advantageous CHP is.” 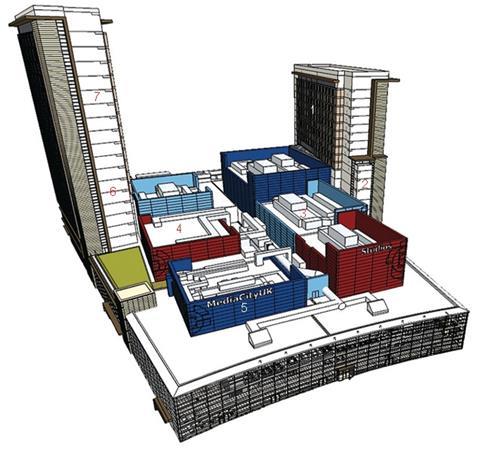 Energy use in the hotel is reduced by occupation-sensitive lighting and air-conditioning technology. Unlike the other buildings on the site, the mixed-use block did not achieve Breeam Excellent.

“There’s not a lot you can do with studios – they use a lot of energy. It’s the nature of the beast. It’s not easy to achieve any more than Very Good,” adds Fairhursts associate director Trevor Cousins.

He says architects and clients are still learning about how to achieve low-carbon buildings. “Clients want Breeam Excellent but they don’t realise what we have to do to achieve that.”

Target Zero guidance helps bridge this gap by presenting fully costed guidance on different measures that can be employed to reduce carbon and increase Breeam ratings.

Printed in BD April 1 2011 in association with The British Constructional Steelwork Association and Tata Steel.