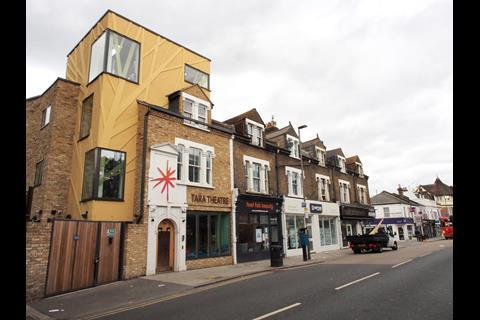 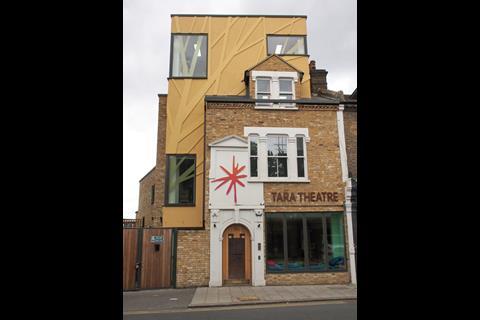 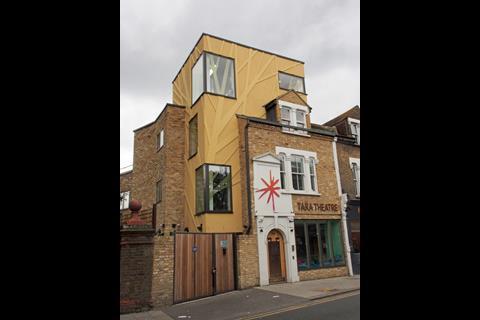 Is shoehorning a 100 seat theatre into a corner shop a brilliant piece of miniaturisation or a case of trying to squeeze a quart into a pint pot?

The story of Tara Theatre in London’s Earlsfield is remarkable. Founded over 30 years ago, it was the UK’s first Asian led theatre and in a classic case of make do and mend, operated out of a Victorian converted end of terrace shop on Garrett Lane next to a railway line. The theatre describes itself as a unique fusion of East and West and has been very successful.

Over the years the building had become run down, didn’t conform to modern safety requirements and the success of the theatre meant more space was needed. Rather than move to a bigger site Tara opted for a major refurbishment.

The design was drawn up by RHWL Arts team, now Aedas. What has been achieved on this site is extraordinary, the auditorium capacity has been increased from 50 to 100 seats, the foyer has been modernised and a rehearsal room has been added with two floors of offices above. There’s a new stair, the building now has a lift and the services have been upgraded.

There was also a desire to visually elevate the building beyond its humble roots; the design and access statement describes the design proposal as ‘bold in ambition’ to give Tara Arts a ‘stronger physical presence within its immediate context and within the wider arts community’

This takes the form of a large box jammed into the building – needed to fit everything in. This has been adorned with a relief of the Banyan tree – India’s national tree where people come together to enjoy the shade.

Accommodating a modern theatre into a corner shop is either a remarkable achievement or a case of trying to squeeze a quart into a pint pot.