Brexit no deal would be a 'huge burden' on industry, says RIBA 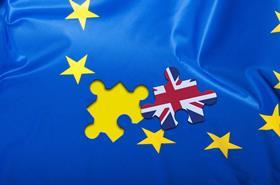 The RIBA has expressed increasing concern about the damage a Brexit 'no deal' would do to the sector following the latest guidance from the government.

Yesterday the government published 30 technical notices detailing how different sectors of the country would be impacted if the UK and EU failed to reach an agreement on the terms of Brexit.

Alan Vallance, RIBA chief executive, agreed that a failure to reach an agreement would be highly damaging to the sector.

He said: “The technical notices published today emphasise the huge burden that a no deal Brexit poses for UK businesses. Architects would be forced to navigate duplicate procurement systems, data protection rules and regulations in order to do business in the EU or import products from Europe.

“This would be a significant additional cost in time and money for our members, bringing no tangible benefit to their businesses. A no deal situation would have an enormous impact on the sector and must be avoided.”

Among the notices likely to hit the industry are changes to the way public sector work is tendered, with OJEU set to be replaced by a new UK tender notice system, and changes to the way goods are traded under the 'New Approach', which includes construction products.

The government said it will continue to allow EU-certified products to be sold in the UK for a limited period of time, but UK construction products won’t be able to be sold in the EU until they’ve been re-tested by an EU-accredited testing house.

Caroly Farbairn, who is the CBI's director-general, said: “These notices make clear firms would be hit with a sledgehammer in the event of ‘no deal’. They also illustrate the extent of the disruption consumers can expect if ideology wins over evidence.

“Commitments to continue regional funding and maintain high environmental standards are positive. However extra costs, duplication of certification and interruptions to data flows would damage the economy, with a knock-on impact for living standards."

But the news was not all bad, with Jonathan White, UK head of infrastructure, building and construction at KPMG, saying government's promise to safeguard infrastructure products which have been bankrolled by European Regional Development Funding was "encouraging".

He said: “The UK has received millions of pounds in European Regional Development Funding, which has undoubtedly supported economic growth across the UK. It is critical that, in the event of a no-deal Brexit, we find alternatives to make up this shortfall in funding in order to safeguard jobs.

“It is encouraging, therefore, to see that the government has extended its guarantee to make sure that certain EU projects are protected should we leave the EU without a deal, and that the government is committed to ensuring that there will be no gap in funding when it comes to regional growth. This is a welcome move in maintaining regional development and ultimately provides a little more certainty for local business and their communities.”