Club cites complexity of construction and ‘normal delays and problems’ 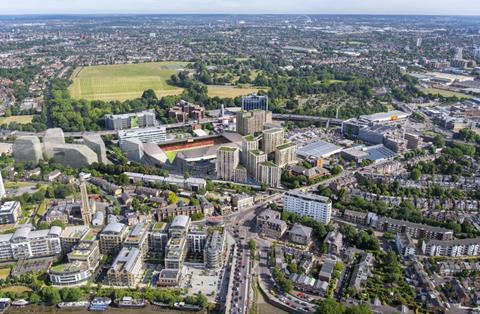 Brentford football club is delaying a move out of its Griffin Park home in west London until the end of the 2019/20 season as it awaits completion of its new AFL Architects-designed ground just over a mile away.

The club, currently lying eighth in the Championship, had been planning to start playing games at the 17,250-seat ground, being built on land adjacent to Kew Bridge railway station, halfway through next season.

With completion originally set for the early part of next year contractor Buckingham Group started building work on the stadium four months ago.

But Brentford now says issues around the stadium’s construction meant it made more sense to delay the opening and remain at its 12,700 capacity Griffin Park ground where it has been since 1904.

“Given the complexity of large-scale building works adjacent to railway lines, the need to anticipate the normal delays and problems that inevitably arise in a complicated construction project, and the operational challenges surrounding a mid-season move, our view is that an end-of-season move is best,” the club said in a statement. 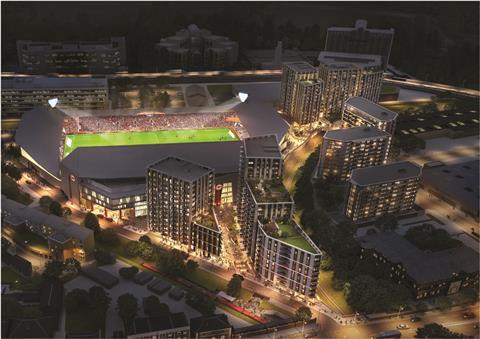 Piling works for the foundations for the new stadium was now 90% complete, Brentford said. The first parts of the steel frame were also in place and the laying of sections of terracing for the south stand was “well in hand”.

The news comes a week after Spurs confirmed its stadium, designed by Populous, was also running late. 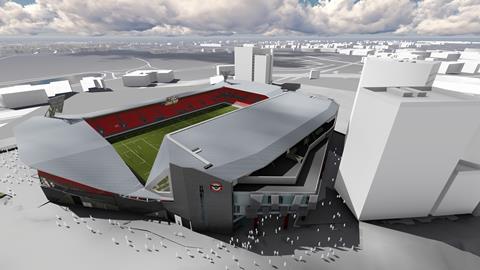 How the new stadium will look when finished

Brentford FC reviewed its original plans for the stadium in September last year, downscaling the capacity from 20,000 to the new limit of 17,250.

As well nearly a thousand new homes designed by Broadway Malyan, the development includes a new purpose-built location for the club’s community activities and a public square with shops and cafes.