If the deal goes through it will make it the most expensive building ever sold in Britain. The Walkie Talkie was bought last year for £1.3bn.

But the pricetag is put into perspective by the cost of converting the grade II*-listed generator into shops, flats and offices, which has spiralled to more than £1.15bn.

A source told BD the sale “allows more equity to be injected into the scheme which is good and very helpful,” adding that it secured the redevelopment of the power station.

“[The sale] creates a solid platform that will ensure the protection, active management and control of the historically important building are maintained,” a spokesperson for the Battersea Power Station Development Company (BPSDC) said.

The £1.6bn is expected to be paid over the remaining construction period. 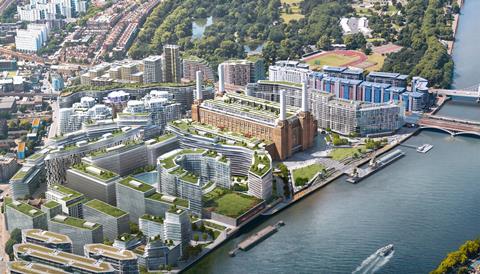 The redevelopment by Wilkinson Eyre and Purcell of Giles Gilbert Scott’s power station has been hit by substantial cost increases since work began on this second phase of the wider £9bn Rafael Vinoly-masterplanned development in 2015.

Completion of the revamp is expected in late 2020 when it will become home to tech giant Apple, 250 apartments, retail and leisure space.

The last of the flats in the first phase, designed by SimpsonHaugh and dRMM and built by Carillion, were handed over last month.

Transport for London is expected to hand back the Northern Line Extension site located in phase 3b to BPSDC next year.

The source added that ”options” were being looked at for this part of the scheme, which mainly contains flats by Frank Gehry.

Sir Robert McAlpine is on site working on the residential-led phase 3a designed by Foster & Partners, having replaced French contractor Bouygues on the job in May last year.