Amanda Levete: ‘It doesn’t get much better than this’ 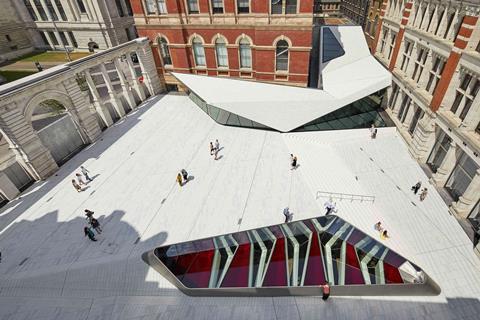 The Sackler Courtyard, V&A Exhibition Road Quarter, designed by AL_A. Café on far side; oculus letting light into the Sainsbury Gallery in the foreground 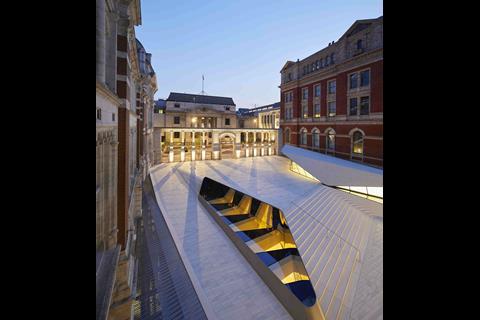 The Sackler Courtyard at the V&A Exhibition Road Quarter, designed by AL_A 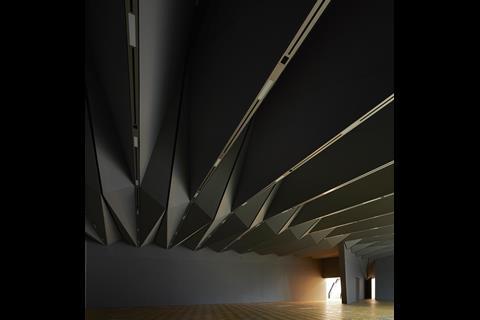 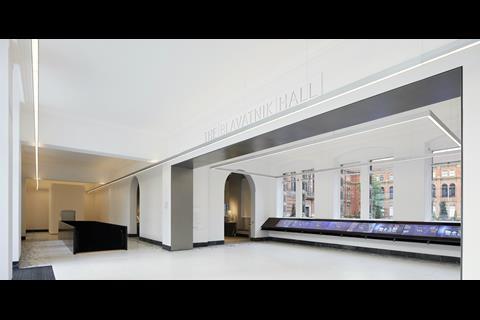 The Blavatnik Hall at the V&A Exhibition Road Quarter, designed by AL_A 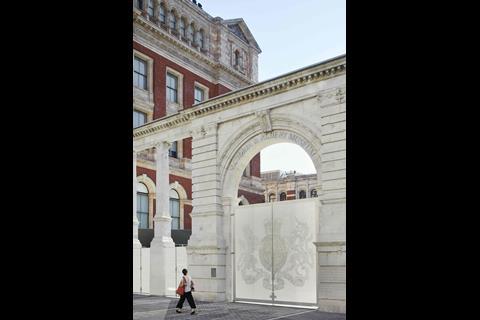 The Aston Webb Screen at the V&A Exhibition Road Quarter, designed by AL_A

Amanda Levete said being picked to design the V&A’s largest architectural intervention in more than a century was “truly thrilling” and “it doesn’t get much better than this”.

The project changes the museum’s orientation, with a new entrance hall reached from Exhibition Road across a large semi-public courtyard – the only one in the world to be paved with hand-made porcelain tiles.

Two entwined black staircases lead visitors down to and then up from a 1,100sq m column-free subterranean gallery space which will house the museum’s temporary exhibitions.

Beneath that is a second basement, some 18m below street level, containing conservation and art handling facilities which has had previously cramped curators weeping with joy, according to project architect Matt Wilkinson.

The project, which controversially punched through the Aston Webb screen to reclaim the old boiler yard, replaced Daniel Libeskind’s infamous Spiral project which was dropped in 2009.

Levete told BD it was in some ways the pinnacle of her career.

She said: “For me this is an extraordinary moment because it’s such an important cultural project in one of the greatest museums in the world in my home town – and it really doesn’t get much better than that.

“AL_A was only two years old when this began so it was a defining moment for us as a practice. This project, probably more than any other we have done, demonstrates very clearly our method of thinking. It’s not about formal language but considering the role of the museum; its place in the city, not just its architectonic form. So much of it is below ground which forced us to think in a very different way.”

She praised the V&A for being an “exemplary client, letting us do such audacious things as cutting a stair out of an existing museum while it remained open to the public and therefore having to underpin it and piling so close to a grade I building – and using it for research.”

Cambridge University has installed sensors in the piles to detect movement and are hoping to disprove aspects of elastic theory with the data they gather.

“It’s the first time heave will have been recorded in this way. I really think we will advance the discipline of engineering,” she said.

V&A director Tristram Hunt called the completion of AL_A’s vision a landmark moment, “the start of a new chapter of expansion and evolution as we both revive our original mission and open up the V&A for the future” – which includes Kengo Kuma’s V&A Dundee and a Fumihiko Maki-designed museum in Shenzhen.

Hunt said Levete and her team at AL_A had created “something which is powerful, innovative and inspiring in equal measure and which neatly celebrates the meaning and purpose, heart and soul, function and being of the V&A”.