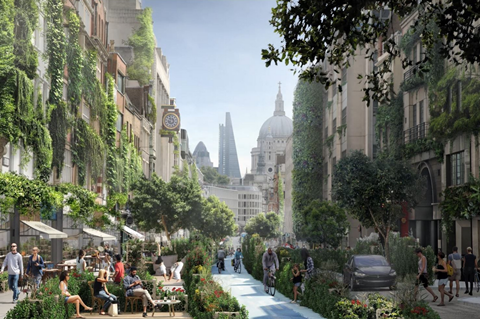 London’s Fleet Street has been re-imagined as a flora-festooned boulevard as part of mayor Sadiq Khan’s plan to designate the capital a National Park City.

Architect WATG has come up with the design of a Green Block (pictured), which it said is “envisaged as a maintenance-free 100% recyclable modular, living building material permeated with native wildflower seeds and containing its own irrigation reservoir”.

It is working with self-styled “guerrilla gardener” Daniel Raven-Ellison on the Green Block, which it said can be used to enhance the natural biodiversity of London in a number of ways, including reclaiming roads and car parks made redundant by the rise of autonomous and shared vehicles and bicycles - and adding greenery to existing cafés and shopfronts.

John Goldwyn, WATG’s vice president of planning and landscape, said the firm’s inspiration was to think about London in the future when there are fewer cars on the road and fewer car lanes.

“This idea claws back space from the roads and returns it to the people of London,” he said. ”As landscape architects, we’ve been incredibly inspired by Mayor Khan’s commitment to the environment in the capital.”