Populous gets nod for extra seats at Spurs stadium

Tottenham Hotspur has been given approval by Haringey council to add more than 500 extra seats at its new ground going up in north London.

The Populous-designed scheme has a capacity for 61,000 seats with that figure now rising by a further 559.

The majority of the extra seats will be located in the single-tier south stand which will now have a capacity of 17,500.

Work on the ground, which sits next door to the club’s existing White Hart Lane stadium, has been progressing while Spurs play out their final games at their current home of more than 100 years.

Main demolition work will begin once the club, which is currently second in the Premier League, plays its final home match at White Hart Lane against Manchester United this Sunday.

The club will play next season’s home games at Wembley stadium before moving into its new ground next August. 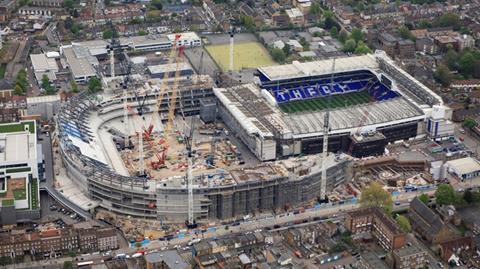 The new ground will have a capacity of just over 61,500