London’s infrastructure was not designed to handle high rises and approving so many is an act of irresponsibility, says Leon Krier 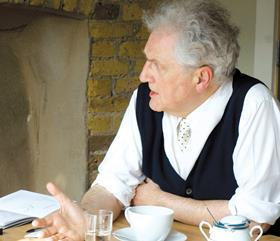 This statement was written for Barbara Weiss’ “Skyline Campaign” website opposing the construction of skyscrapers in and around London. It expresses a self-evident truth. The endemic vehicular and pedestrian congestion of large parts of London is the alarm signal that the carrying capacity of its network is under terminal stress.

Increasing the density of the built fabric is in my opinion due to the ignorance, dishonesty or incapacity of those in authority; in short to their ethical, political and technical irresponsibility.

I keep wondering how many otherwise intelligent persons can continue to negate the blatant evidence and instead do everything in their power to participate in the folly, to aggravate the situation.

Network congestions are the result of too many entities crowding the same circulation routes and nodes at the same time. The idea that 400+ new high-rises will improve London is plain dumb and, in the long term, criminally so.

London’s transport network, already under permanent strain, will never be able to handle the ever increasing crowds in an urbane way. Whether the network congestors are designed by world-class architects or simple hacks is immaterial: they contribute to an irreversible degradation. We are well over the tipping point. The question then is who to blame, who can take responsibility and what can be done about it. The solution has been known since Ebenezer Howard, Otto Wagner and Eliel Saarinen published their diagrams. The post-war New Town policy was the correct move but was based on the wrong diagrams and architecture as promoted by CIAM. 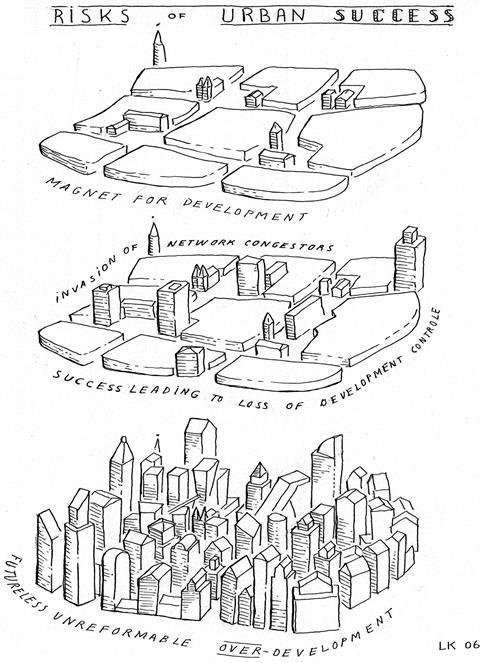 Architects and urbanists are in our societies the agents who are responsible for delivering development models. The Charter of New Urbanism (CNU) is so far the only coherent document about sustainable urban and land development emitted from the ranks of the profession. The Prince of Wales’ Poundbury project is in the UK the only large urban project developing according to the principles set out in his book A Vision of Britain and sanctioned by the CNU charter eight years later.

After 50 years of involvement in the profession I am hardened against all manner of environmental aggressions, yet nothing prepared me for the abject horror of recent building activity in London. 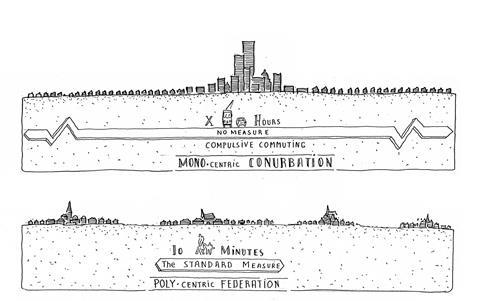 Even the slightest confidence in the profession will vanish when navigating the Thames from Richmond to Woolwich. Viewing the Isle of Dogs from Greenwich Hospital should raise alarm bells with anyone. If that doesn’t do it I invite you to imagine: what if all buildings from before 1940 disappeared from London? Mayfair, Westminster Palace, Regents Park Terraces, Pall Mall, Belgravia, Kensington, Primrose Hill, Hampstead and all London villages and traditional fabric replaced by post-1945 designs, densities and materials. If that is not enough to convince you of the tragic loss of professional capacity and responsibility, imagine conversely: what if all post-war buildings were replaced by buildings and densities of before 1945?

In 1988 I was briefly on a commission advising President Mitterrand about future development of Paris. Remy Prud’homme, a leading economist, pleaded that Paris should grow by another three million people over the next 20 years just as it had done over the past score years. He based his proposal on the statistical fact that a resident of the Bassin Parisien produced a higher added value than citizens of any other French region. I suggested that if that were the criterion of our proposals, we should suggest that the whole of the French population be moved into the Paris Metropolitan Area. An absurd thesis which stealthily dominates to this date the economic development of all modern nation states.