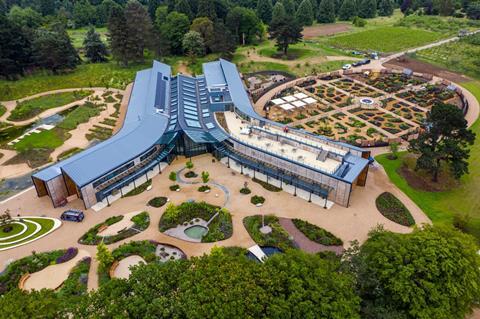 Wilkinson Eyre has completed its gardening science centre for the Royal Horticultural Society (RHS) where scientists will research ways that plants can help fight climate change.

The 4,750sq m facility, known as RHS Hilltop, has opened its doors to visitors as part of the RHS’s famous Wisley gardens in Surrey.

Staffed by 70 RHS scientists and students, it contains “trailblazing” laboratories which will research the best plants for soaking up pollution, easing flooding, capturing carbon and cooling cities.

The labs will be in the east wing of the two-storey building, which will also contain library space housing more than 86,000 plants, 24,000 insect specimens and 28,000 books, periodicals and art dating back more than 500 years. 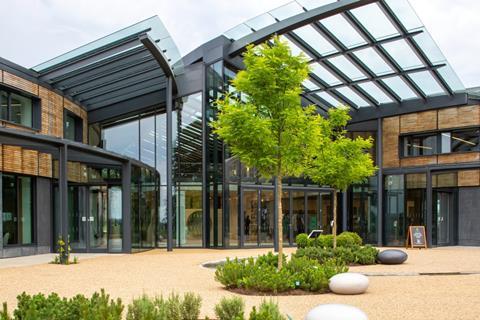 The main entrance is covered by a glass and steel canopy

The west wing will contain public facilities including teaching studios and an events hall.

Between the two wings will be a double-height glazed exhibition space featuring a pitched roof leading out on to a cantilevered canopy over the centre’s main entrance. 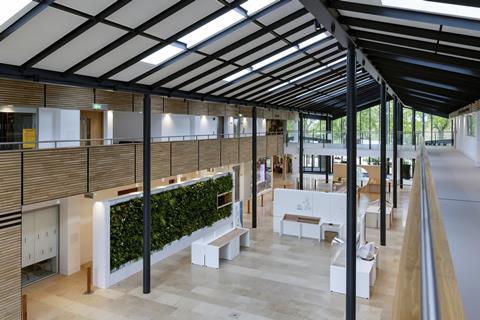 A double-height exhibition space sits between the two buildings’ wings

Wilkinson Eyre associate director Geoff Turner said the centre is designed to integrate with the working gardens and provide a central hub for the horticultural science community. 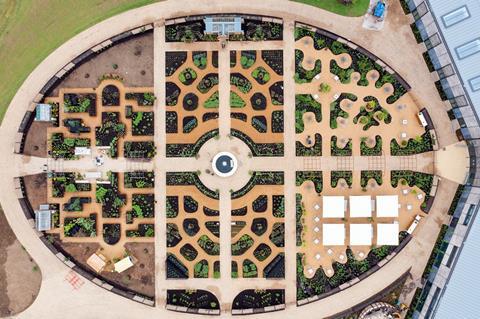 The health and wellbeing garden, one of three gardens at the hub, is located outside the main entrance

RHS Wisley programme director Andrew Jasper added that the hub is a “signiciant legacy project for the RHS and for UK horticultural science”.

“We know that it will stand the test of time as a space of great architectural merit as well as safeguarding vital RHS collections and research for generations to come.” 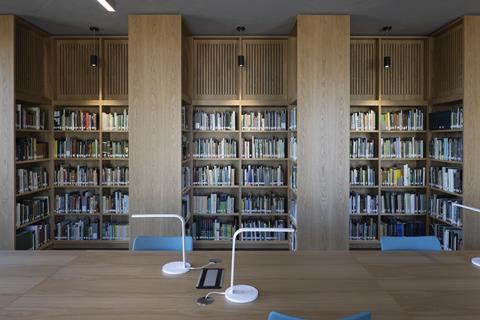 The centre is part of a wider transformation of the RHS’s 97ha Wisley site, which has been awarded £4m of National Lottery Heritage Funding.

The gardens at Wisley receive more than a million visitors each year.

In 2013, Wilkinson Eyre’s designs for the cooled conservatories at Singapore’s Gardens by the Bay project were awarded the RIBA Lubetkin Prize.

The two giant glass structures cover an area of more than 20,000sq m and are divided into three zones for flowers, mediterranean plants and cloud forests.