Antarctica: Designing for the planet’s most hostile continent

A £100m Antarctic infrastructure programme presents some unique design challenges – like deflecting snow and elephant seals. Elizabeth Hopkirk hears about the hardships and rewards of building at the bottom of the world 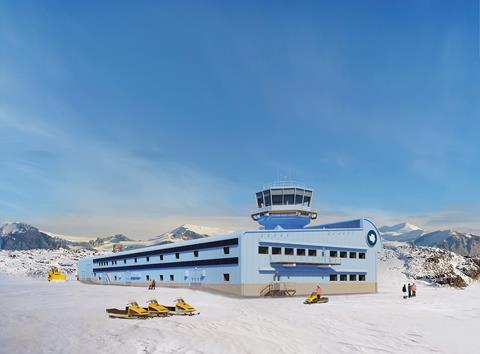 The proposed Discovery Building, a 4,500m² base that will replace several ageing buildings at Rothera as the operational and recreational heart of the British Antarctic Survey

”People are quite surprised when I say this, but a Scottish winter is probably worse than working in Antarctica,” says Bam Nuttall’s Graham Hopper. The civil engineer, speaking via Zoom from his native Inverness, knows a thing or two about remote locations and hostile conditions – as does his employer. His previous projects have included tunnelling through mountains on rain-lashed Scottish islands to build hydroelectric schemes.

By contrast, the weather in an Antarctic summer – roughly November to April, the only time when construction is possible – can be positively pleasant, he says. It is relatively dry, often sunny and sometimes the temperature even edges above 0ºC. The scenery is also spectacular and the snowboarding passable. You just need to watch out for elephant seals on your way to the office.

You would have been forgiven for assuming that the biggest challenge facing a contractor and design team at the bottom of the world was the inhospitable climate. The ground, even when not covered by hundreds of metres of snow and ice, is underlain by permafrost harder than concrete, the temperature is routinely below the point at which cheap steel shatters and it is not unusual for the wind to be a bracing 70mph. But, says Hopper, building in difficult conditions is just “what we do”.