Two pubs have upgraded from Grade II to Grade II* and two listed at Grade II, as part of Historic England’s work to protect pub interiors. 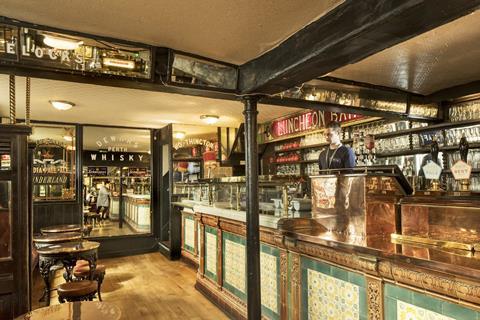 The government has upgraded the listings of a pub in Leeds and one in Maida Vale from Grade II to Grade II*, on the advice of Historic England, the quango announced today.

Whitelock’s Ale House in Leeds, described as an “upmarket luncheon bar”, is now grade II* listed. It was once said by poet laureate Sir John Betjeman to be “the very heart of Leeds” and has been the favourite waterhole of celebrities, such as the actor Peter O’Toole. 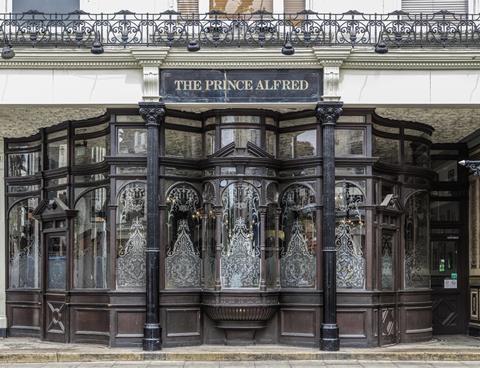 The Prince Alfred in Maida Vale

The Department for Digital, Culture, Media and Sport (DCMS) has also given The Prince Alfred in Maida Vale a Grade II* listing. It was fitted out in the 1890s, at the height of the ‘pub boom’, and Historic England says it is “one of the best examples of urban pubs of its era”. The quango said the pub had “lavish fittings and exceptionally well-preserved bar compartments”. A pair of cast-iron lamp standards at the front of The Prince Alfred have also been newly listed at Grade II. 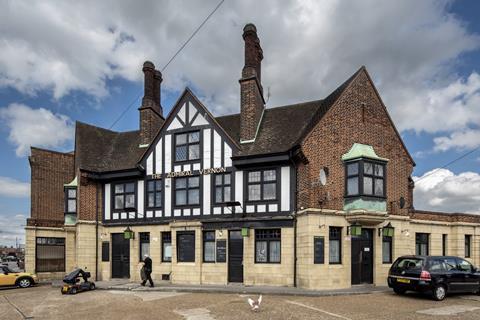 The Admiral Vernon, a 1930s ‘Brewers’ Tudor pub built to serve one of England’s largest council estates in Dagenham, has now been listed at Grade II. As has the Blythe Hill Tavern in London, with its inter-war, ‘t-shape’ layout. 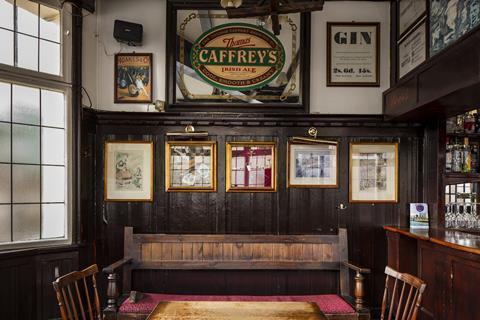 Heritage minister Nigel Huddleston said: “These listings recognise and celebrate the importance of the local pub to people across the country and will make sure their legacy endures for many years to come.”

Chief executive of Historic England Duncan Wilson said: “At a time when many historic pubs in England are susceptible to change or at risk of closure, we are pleased to celebrate pubs that have kept their remarkable interiors.”

Chair of CAMRA’s Pub Heritage Group Paul Ainsworth added: “Times are tough for all pubs at the moment, including those with important historic interiors. The more protection they can receive, the better.”

Historic England has worked with the Campaign for Real Ale (Camra) to save pub interiors and the announcement today is on Britain’s ‘beer day’.

Details of the interiors of the following pubs have been added to their listings: 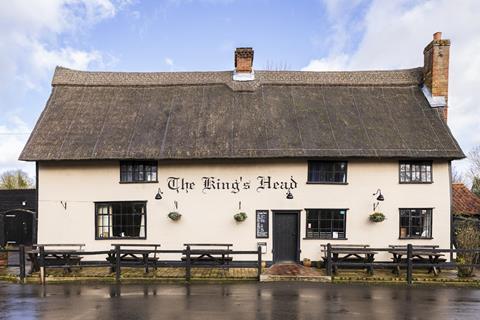 The King’s Head, Laxfield (Grade II) – This village pub dates to the 16th century. It has a rare, historic arrangement paralleled at the North Star, Steventon in Oxfordshire (see below). The servery, which is also the ‘cellar’, has no counter, with beer served directly from casks. It is one of just seven pubs in England which still retains this unusual arrangement. 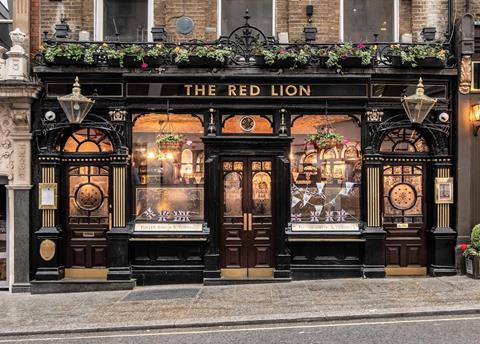 The Red Lion, Westminster, London (Grade II) -  Built in 1821 but its frontage was reworked in 1871 by architect W H Rawlings. There are three doorways at the front of the pub, which is a sign that it was subdivided internally with separate spaces round the central servery. There is a glass panel from a doorway marked ‘private bar’, which gives access to a glittering room at the back lined with etched and diamond-cut mirrors. 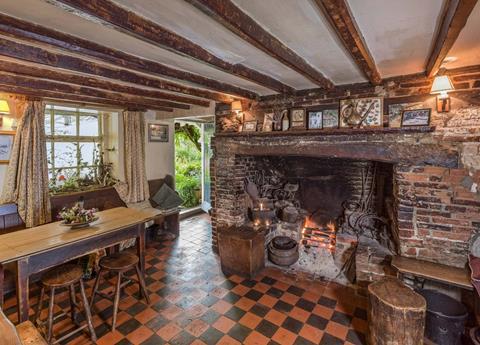 The Harrow Inn, Petersfield (Grade II) - This roadside inn dates to around the 18th century or possibly earlier. It’s well-located at the meeting of six roads, including two known routes for cattle drovers headed for Alton or the Farnham Corn Market, which in the middle of the 18th century was one the largest in the south of England. Phases of the building’s history can be read through its timber frame, smokehood, inglenook and beams. 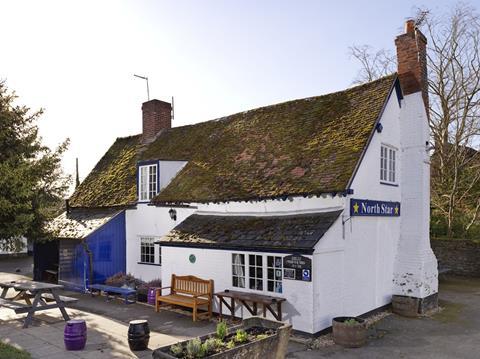 The North Star Inn, Oxfordshire (Grade II) - The North Star Inn dates to the late-16th or 17th centuries and may have originally been a house before converting to a pub. The main bar contains freestanding bench seats with arms and a high back that are normally found in country kitchens. They form a rectangle focusing on the warmth of the fireplace. There is no bar counter - service is instead via a stable door from the ground-floor cellar and a hatch to the garden. 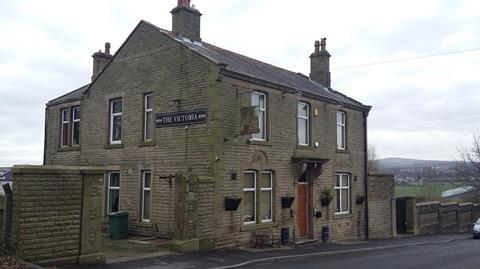 The Victoria, Blackburn (Grade II) - A fine Edwardian pub of 1905 with an intact northern ‘lobby plan’ arrangement. The lobby, drinking corridor and staircase all have full-height Art Nouveau tiling with flower motifs. Five rooms lead off the lobby, mostly with original fittings. Four are named in the door glass – the Commercial Room, Parlour, Public Kitchen and the Bar Parlour. 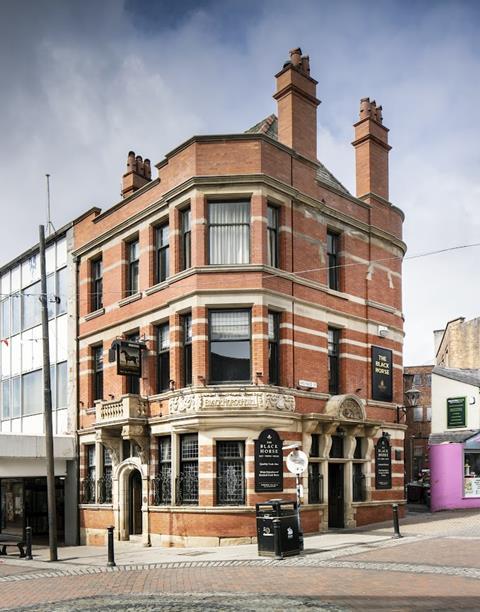 The Black Horse, Lancashire (Grade II) - An impressive pub from the boom years of Victorian urban pub building. It was rebuilt in 1898 to the designs of local architect J A Seward for Kay’s Atlas Brewery of Manchester. The Orchard Street entrance leads into a remarkable public bar, with mosaic flooring and a semi-circular ceramic counter. 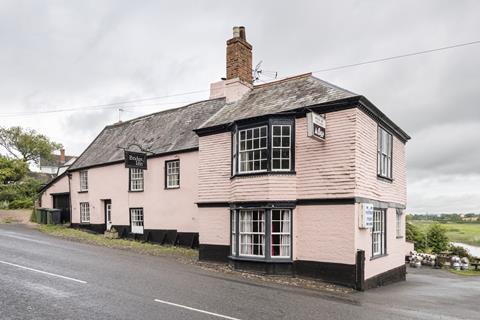 Bridge Inn, Topsham, (Grade II) – This former malthouse with kiln has been run by the same family since 1897. There are freestanding bench seats, a large stone fireplace, a salt cupboard and a hatch to a parlour through which drinks are fetched from the ground-floor cellar. The parlour area is a private space where customers may be invited to sit – only a handful of pubs are thought to have similar rooms where customers may sit behind a working serving area.